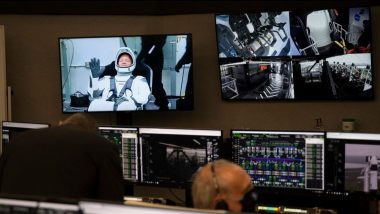 Washington, May 28: SpaceX decided to postpone its historic first astronaut launch on Wednesday, due to bad weather conditions. It was less than 20 minutes to go before the scheduled liftoff from the Kennedy Space Center in Florida. The launch has been rescheduled for  Saturday, May 30, at 3:22 p.m ET. NASA in a tweet further clarified that the launch was postponed only due to the rough weather and there were no issues with the SpaceX-Falcon 9 rocket and Crew Dragon spacecraft.

The reason why it is being termed as a historic launch is that it will end nearly a 10-yearlong U.S. dependency on Russia for seats to space. In addition to this, it also marks the first time Elon Musk's private space firm, SpaceX, is launching astronauts. Know All About the First Manned Space Flight That Will Take Off From Florida.

The launch was scheduled to take place at 4.33 pm EDT on Wednesday, which would be 2:30 am in India on Thursday. Demo-2 is the first crewed mission for the US space agency's Commercial Crew Programme. Ahead of their historic launch to the ISS, NASA astronauts Douglas Hurley and Robert Behnken said that they were ready for the upcoming journey. Several people had gathered along Space Coast in Florida to watch the launch and the Falcon rocket developed by private firm SpaceX was on the launchpad when the mission was aborted just minutes ahead of the launch. Watch Online Telecast of Astronauts Douglas Hurley And Robert Behnken's Journey to International Space Station Aboard Crew Dragon Spacecraft From Kennedy Space Center.

Today’s launch was scrubbed due to weather. There were no issues with the @SpaceX Falcon 9 rocket and Crew Dragon spacecraft. The next launch attempt is Saturday, May 30 at 3:22 p.m. ET. #LaunchAmerica More photos from today: https://t.co/8due5jBg5Y pic.twitter.com/wvvd3WcnWz

If everything goes as per the plan on Saturday, then it will be the first flight into the orbit of American astronauts on American rockets from American soil since the end of the space shuttle era in 2011.

Check photo tweeted by Elon Musk before the launch got aborted on Wednesday:

President Donald Trump tweeted his thanks to NASA and SpaceX for their "hard work and leadership.

Here's what US President tweeted:

Thank you to @NASA and @SpaceX for their hard work and leadership. Look forward to being back with you on Saturday!

" This will be SpaceX's final test flight for NASA's Commercial Crew Programme and will provide critical data on the performance of the Falcon 9 rocket, Crew Dragon spacecraft, and ground systems, as well as in-orbit, docking, and landing operations.

(The above story first appeared on LatestLY on May 28, 2020 07:30 AM IST. For more news and updates on politics, world, sports, entertainment and lifestyle, log on to our website latestly.com).