Overfishing Threatens Marine Life! Over 70% of Shark and Ray Populations Declined in the Past 50 Years, Scientists Blame Humans

Researchers found the alarming decline in species ranging from hammerhead sharks to manta rays. They are calling for an urgent action to be taken immediately so a shark population can be maintained. 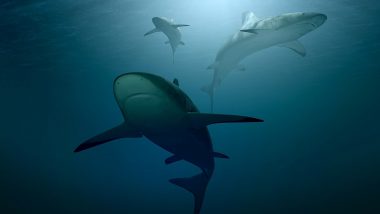 Human interference is threatening the health of the world oceans. From coral bleaching to sea level rise, entire marine ecosystems are rapidly changing. The latest study has found that sharks and ray populations around the world have declined a ‘staggering’ 70% over the past 50 years—and scientists blame humans. If we don’t act now, overfishing could wipe out the population completely. Researchers found the alarming decline in species ranging from hammerhead sharks to manta rays. They are calling for an urgent action to be taken immediately so a shark population can be maintained.

The study was published in the journal Nature, where scientists measured shark and ray populations from 1970 to 2018. They found a 71.1 percent decrease. In addition, three-quarters of the species are now threatened with extinction and researchers say the true collapse is likely even worse than their findings. They added that it is much worse than other animal populations we have been looking at. According to the study, out of 31 species of oceanic sharks and rays, 24 are now threatened with extinction and many are classified as critically endangered. Endangered Sharks Passed Off As Fish and Chips in UK Shops to Unsuspecting Customers! Researchers Find Out During DNA Probe.

“It's an incredible rate of decline steeper than most elephant and rhino declines, and those animals are iconic in driving conservation efforts on land,” co-author Nick Dulvy was quoted in reports.

A huge increase in fishing since 1970 has ravaged the abundance of sharks and rays in our oceans, with previously widespread species such as hammered sharks now facing the threat of being wiped out. The researchers call for proactive measures to prevent total collapse. “This should be a wake up call for policy makers,” Nathan Pacoureau, a researcher at Simon Fraser University in Canada, lead author of the study was quoted. 5 Biggest Threats to Our Oceans and Marine Life!

While sharks and rays can be affected by ship strikes, oil and gas drilling and increasing the climate crisis, the researchers said that overfishing was the main cause of the decline. Why is overfishing blamed? Studies have found that sharks are often killed unintentionally by fishers using nets to catch other marine creatures. They are also targeted for other purposes like  making shark fin soup, which involves sharks having their fins hacked off before their helpless bodies are discarded back into the ocean.

Low population growth rates make it especially difficult for sharks to bounce back from over-exploitation. But scientists say that conservation can still work if implemented properly. If we don’t act immediately, it would be devastating for both the health of marine ecosystems and the food security of people globally. As top predators in the ocean, sharks help maintain a balance of the food chain and they boost the health of seagrass beds and coral reefs.

(The above story first appeared on LatestLY on Jan 29, 2021 09:58 AM IST. For more news and updates on politics, world, sports, entertainment and lifestyle, log on to our website latestly.com).