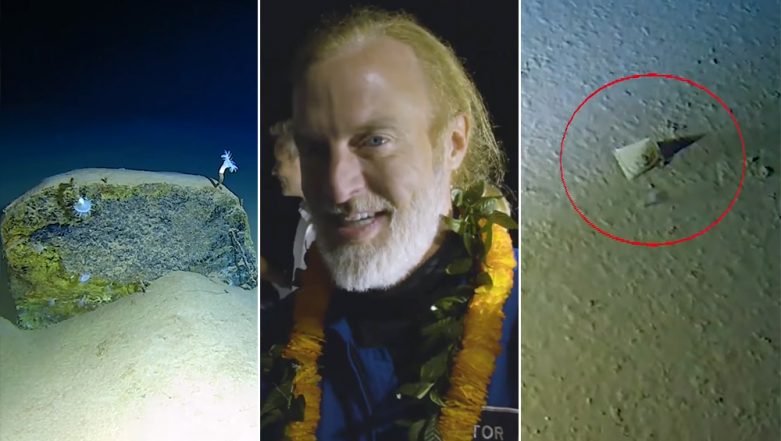 Victor Vescovo, a retired naval officer during his record-breaking journey to the deepest place on Earth found something that shows how humans have destroyed the planet. The American explorer found human-made objects that are speculated to be plastic in the deepest natural trench. The diver travelled 11 km to reach the deepest place in the Mariana Trench in the Pacific. He spent four hours exploring the bottom of the trench. As World Wildlife Day 2019 Highlights 'Life Below Water' Theme, Here Are 5 Biggest Threats to Our Oceans and Marine Life!

Victor's dive was precisely calculated to be 10,972 metres which are 16 meters lower than the previous deepest descent in the trench that was undertaken in 1960. With his dive, Victor has become the first person to reach the deepest part of the Pacific Ocean. As he went deeper into the ocean, there was a risk of his submersible imploding if things did not go as planned. According to The Guardian, Stephanie Fitzherbert, a spokeswoman for Victor's Five Deeps Expedition said that Victor, the Dallas-based co-founder of Insight Equity Holdings, is trying to verify if manmade material is plastic or not. Earth Day 2019: Here Are 5 Ways In Which You Can 'Protect Our Species'.

According to the United Nations, estimated 100m tonnes of plastic is currently found in the world's oceans. Four expeditions made in the last three weeks to the Mariana Trench in the submarine, DSV Limiting Factor has collected biological and rock samples. Victor is the third person to have dived to the deepest point in the ocean, known as Challenger Deep. The Canadian moviemaker James Cameron was the last to visit in 2012 in his submarine, reaching a depth of 10,908 meters. The first-ever expedition to Challenger Deep was made by the US Navy in 1960, reaching a depth of 10,912 meters.

According to reports, more than eight million tons of plastic is dumped into our oceans every year. Thousands of animals get entangled in fishing nets while many die feeding on plastic leftovers mistaking it for food. Oil spills and underwater construction also terribly affect marine life. There have been innumerable cases of sea turtles, fish, seabirds, whales, ducks, tortoise dying after consuming plastic waste.