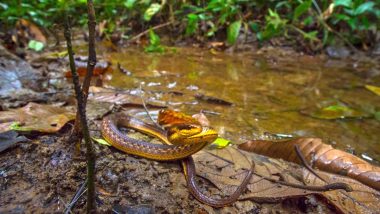 A serpent earlier considered extinct has made a surprising reappearance in north-east India. Assam Keelback snake was found by a team of researchers from Wildlife Institute of India. The serpent was found in the Poba reserve forest on the Assam-Arunachal Pradesh border in 2018. This snake is endemic to this place and isn't found anywhere else in the world. So this reappearance is indeed an exciting thing for all those with a keen interest in herpetology. Pictures of this snake have been shared online. Salazar Slytherin Discovered in Arunchal Pradesh! New Pit Viper Snake Named After Harry Potter Character.

As per reports, two of the male keelback snakes were last seen in the year 1891 in the Sibsagar district of Assam. One of these was sent to the Kolkata's Zoological Survey of India and the other in London’s Natural History Museum. After a similar serpent was spotted again, the wildlife scientists performed DNA profiling to understand if it was Assam Keelback. They also looked into the specimen saved in London and it is confirmed that the snake has made a reappearance. It was believed that it had gone extinct. Three New Horned Frog Species Discovered From North East India; Know More.

Check Pics of the Assam Keelback:

Lost and found!!! The #Assam Keelback snake has been found after 129 years from #Poba reserve forest on the #Assam-Arunachal Pradesh border by a team from Wildlife Institute of India @wiiofficial1. This species is not found anywhere else. Pic Credit- Dhritiman Mukherjee pic.twitter.com/AKcxhFMaCE

Detailed Photos of the Serpent

( #Assam #keelbacksnake registers presence after more than a century )

As reported in Hindustan Times, the snake was found back in September 2018 when WII team was retracting Abor Expedition of 1911. Abhijit Das, a scientists was quoted in the report, "It was in a marshy wetland inside the forest, where I encountered this snake endemic to Assam and not seen for the last 129 years. It was totally unexpected as people had thought it to be extinct." He added that had there been no specimen of the keelback snake in London it would be difficult to identify this species. Now the team will make more efforts to find other members of this snake in this marshy habitat.

These Keelback snakes are non-venomous and grow up to 50-60cms. The scientific name is Hebius pealii. Learnings of their habitat in the marshy, wetland regions are now known because of this recent discovery.

(The above story first appeared on LatestLY on Jun 30, 2020 03:02 PM IST. For more news and updates on politics, world, sports, entertainment and lifestyle, log on to our website latestly.com).