Amazon Rainforest Fires: In The Blame-game Between Brazilian President Jair Bolsonaro and NGOs, What Really Caused This Massive Wildfire? 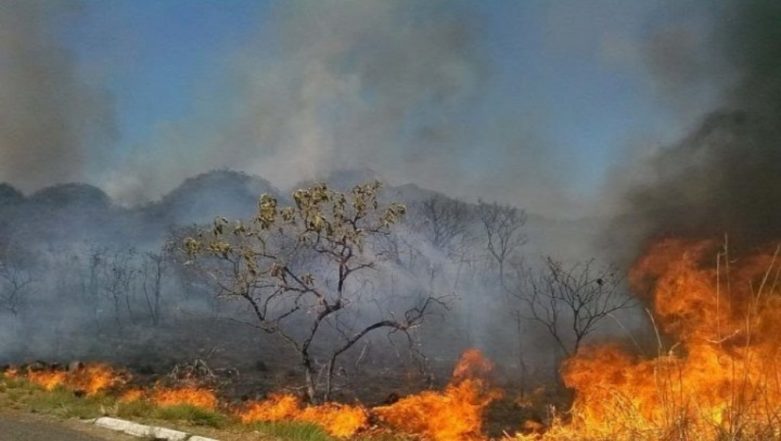 The Earth's most important ecological system, the Amazon rainforest is burning. With a record number of fires this year, the expansive flames have been captured even by NASA. The extent of this fire is dangerous and everyone is praying for the Amazon on social media platforms. But more than the prayers, one really needs to think upon the cause of this wildfire and what can be done to eliminate it. The aftereffects of this fire will not affect only Brazil but the entire planet as the rate of global warming will rise. Now, different claims keep coming on the cause of these fires. Some pointed to President Jair Bolsonaro's management of the environment. In a counter, Bolsonaro targetted NGO and environmental groups of setting fires in the Amazon to bring him trouble. The basic question still remains, what caused these fires?

Wildfires are common during the dry season and are more of a seasonal summer threat. The hot weather intensifies the fire and prevalent winds only spread them vastly. The weather is also responsible for the start of a fire and it engulfs more areas if there are strong winds. As the INPE researcher Alberto Setzer also stated, "The dry season creates the favourable conditions for the use and spread of fire, but starting a fire is the work of humans, either deliberately or by accident." One cannot neglect the second part-- deliberate actions of the humans that are responsible. Amazon Rainforest Fires Hit Record Number This Year With 72,843 Incidents Detected So Far by Brazil's Space Research Centre.

Coming to the man-made causes, it is said that people in Brazil are clearing out the land for farming and ranching purposes. The states of Mato Grosso and Para which are among the most affected regions also happen to be the agricultural frontier of the country. These activities have definitely spurred a rise in deforestation.

Brazil's new right-wing president Jair Bolsonaro is said to favour development over conservation and has been criticised all over the world. Since Bolsonaro took to office in January, he has emphasised on developing the Amazon region for farming and mining. The environment agency has issued fewer penalties. Amazon Rainforest Fires Visible From Space! NASA Shares Devastating Images of Smoke as Brazil Forests Burn at 'Record Rate'.

In June 2019, there were rising concerns about the deforestation of the Amazon. Data from the government’s satellite monitoring agency revealed forest land of two football pitches was cleared every minute. Soon after these claims, director of Brazil’s National Space Research Institute was sacked for targetting Bolsonaro's policies. He called them smearing of Brazil's reputation in the world. All of this attracted global attention and Brazil's policies were once again criticised.

To make matters worse, Bolsonaro is now targetting the NGOs and accusing them of burning the Amazon just so to embarrass his government. Talking about the wildfires, he said, "On the question of burning in the Amazon, which in my opinion may have been initiated by NGOs because they lost money, what is the intention? To bring problems to Brazil." He did not have any proof but insisted that certain groups went in the forests to film the fires. He called it "his feeling."

So while the blame game among the senior authorities and the environmentalists continue, the fire rages on. The Amazon Rainforest is known to be the lungs of the world, which are currently choking on the developmental policies. Over a million species of plants and animals will be charred in these massive fires. The fight against global warming becomes tougher as we lose more cover that protects us from it.