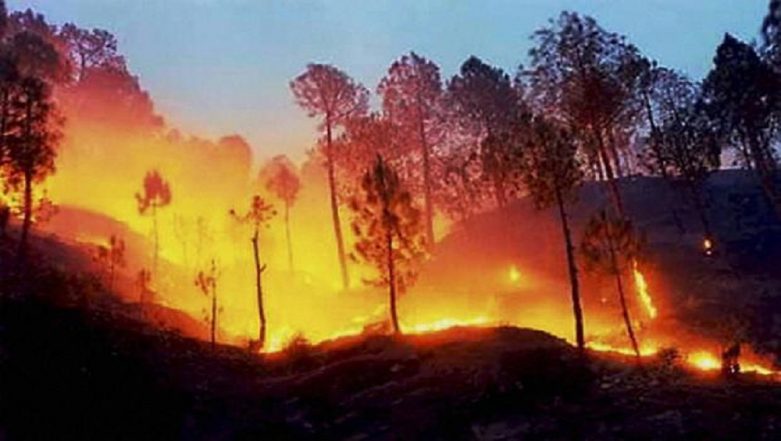 Brasilia, August 20: The Amazon rainforest has been devastated by wildfires which have been raging for the past two weeks. The fires are so intense that they can be seen from space. The hashtag #PrayForAmazonia went viral on Twitter on Tuesday as social media users attempted to draw the world's attention to the fires in the Amazon rainforest. Twitter users on Tuesday also slammed the media for not covering the Amazon blaze. California Wildfires: 25 Feared Dead in Worst Fire Incident, Thousands Forced to Flee.

It is yet not clear as to whether the fires were caused by agricultural activity or deforestation. According to reports, the incidents of wildfires in Amazonia increased after Brazilian President Jair Bolsonaro opened the rainforest to corporates. He is being criticised for his environmental policy. Wildfire Forces 4,000 to Evacuate in Spain's Canary Islands.

One of the Twitter users expressed concern over the Amazon fires:

#ICantSleepBecause The Amazon has been burning for 3 weeks, and I’m just now finding out because of the lack of media coverage. THIS IS ONE OF THE MOST IMPORTANT ECOSYSTEMS ON EARTH. SPREAD AWARENESS #PrayforAmazonia . Let's save it. Retweet to spread the information. pic.twitter.com/N5MhWz5DDp

Another Twitter user blamed the Brazilian President for the present condition:

This is the Brazilian environmental policy under president Bolsonaro. He doesn't care about life. The Amazon Rainforest's burning for about 3 weeks and nothing's been done. @BadAstronomer @azmoderate #PrayforAmazonia #PrayforRondonia pic.twitter.com/haIrQzFdk9

Twitter user Daniel Schneider demanded that the Brazilian government stops the entry of ranchers into the forest:

The number of forest fires in the Amazon Rainforest in #Brazil is up 82% from last year. The fires are purposely set by ranchers to clear land. They then burn out of control. The Bolsonaro govt has eliminated restrictions on burnings. This must be stopped! #PrayforAmazonia. RT pic.twitter.com/cAyUlqjdRz

Wildfires raging in the Amazon rainforest have hit a record number this year, with 72,843 fires detected so far by Brazil's space research centre INPE. The surge marks an 83% increase over the same period of 2018, the agency said on Tuesday, and is the highest since records began in 2013. Since Thursday, INPE said satellite images spotted 9,507 new forest fires in the country, mostly in the Amazon basin, home to the world's largest tropical forest seen as vital to countering global warming. Uttarakhand Forest Fires: Massive Wildfires Continue to Spread in Tehri Forests, Almora, Nainital Worst Hit; See Pics.

Images show the northernmost state of Roraima covered in dark smoke. Amazonas declared an emergency in the south of the state and in its capital Manaus on Aug. 9. Acre, on the border with Peru, has been on environmental alert since Friday due to the fires. Space agency INPE, however, said a large number of wildfires could not be attributed to the dry season or natural phenomena alone.

The Amazon rainforest is a moist broadleaf forest in the Amazon biome that covers most of the Amazon basin of South America. Around 60 percent of the forest is contained within Brazil, followed by Peru with 13%, Colombia with 10%, and with minor amounts in Venezuela, Ecuador, Bolivia, Guyana and Suriname.