Lebanese President Michel Aoun has said "external interference through a rocket or bomb" is also being investigated in order to ascertain the cause of the massive blast that rocked Beirut. 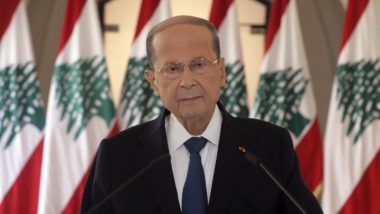 Beirut, August 7: Lebanese President Michel Aoun has said "external interference through a rocket or bomb" is also being investigated in order to ascertain the cause of the massive blast that devastated Beirut on Tuesday. According to local media reports, President Michel Aoun said the investigation in the Beirut port blast is being carried out on three levels, including the role of external elements. 'Looks Like a Terrible Attack': US President Trump on Lebanon Blast.

"The cause has not been determined yet. There is a possibility of external interference through a rocket or bomb or other act," Aoun was quoted as saying. On the direction of the prove, he further said: "First, how the explosive material entered and was stored ... second whether the explosion was a result of negligence or an accident ... and third the possibility that there was external interference (are being investigated)." Lebanon Blast Caught on Camera: Terrifying Videos and Images of Explosion at Beirut Port Shared.

A series of minor blasts followed by a massive explosion rocked Beirut on Tuesday, leaving scores dead and around g000 wounded, and shaking buildings all over the city. The exact cause of the blasts has so far remained unknown. Earlier Lebanese Prime Minister Hassan Diab said that 2,750 tonnes of ammonium nitrate had exploded near the Port of Beirut. President Aoun had tweeted that it was "unacceptable" that 2,750 tonnes of ammonium nitrate were stored unsafely.

Interior Minister Mohammad Fahmi also said that the explosive chemicals stored at Port of Beirut may have caused the explosions. Sixteen employees at the Port of Beirut have been arrested in connection with the explosions in the Lebanese capital that have claimed the lives of over 135 people so far.

(The above story first appeared on LatestLY on Aug 07, 2020 05:40 PM IST. For more news and updates on politics, world, sports, entertainment and lifestyle, log on to our website latestly.com).