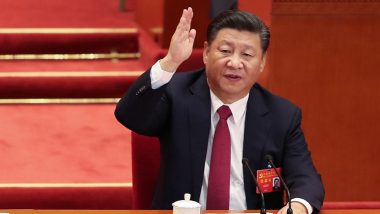 New Delhi, July 6: China, facing accusations of land and sea intrusion by western and eastern neighbours, has now laid claim over a territory which falls under neighbouring Bhutan. Beijing, in a recent multilateral meeting, opposed to the funding of Sakteng Wildlife Sanctuary in Bhutan's Trashigang district.

At the 58th meeting of the Global Environment Facility (GEF) Council last month, China opposed to the funding of the wildlife sanctuary project as requested by Bhutan. The representative of Beijing, at the meeting, claimed that the territory is part of the area disputed along the China-Bhutan border. Nikki Haley Praises India for 'Not Backing Down' Against China.

The claim made by Beijing, at the GEF virtual meet on June 2-3, was categorically rejected Indian IAS officer Aparna Subramani, who represented India, Sri Lanka, Bangladesh and Bhutan in the meeting.

"Bhutan totally rejects the claim made by the Council Member of China. Sakteng Wildlife Sanctuary is an integral and sovereign territory of Bhutan and at no point during the boundary discussions between Bhutan and China has it featured as a disputed area," she was reported as saying, as per minutes of the meeting.

While the GEF agreed with the Indian envoy's view, the concerns raised by China were included in minutes of the meeting. After the matter became public, the Thimphu decided to issue an official demarche to Beijing.

Since both countries do not have diplomatic offices based in either of the capitals, the Bhutanese envoy in New Delhi issued the demarche to his Chinese counterpart, noting that the Sakteng Wildlife Sanctuary is an "integral" part of Bhutan.

(The above story first appeared on LatestLY on Jul 06, 2020 11:40 AM IST. For more news and updates on politics, world, sports, entertainment and lifestyle, log on to our website latestly.com).