China Plane Crash: What We Know So Far About the China Eastern Plane Crash in Guangxi Region

No survivors had been found as rescuers searched the rugged, charred mountainside near the city of Wuzhou in the Guangxi region. 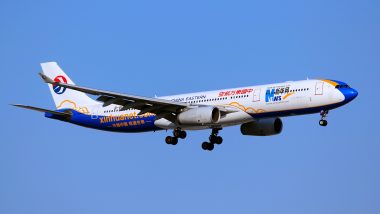 Beijing, March 22: The crash of a Boeing 737-800 passenger jet in China's southwest started a fire big enough to be seen from space and forced rescuers to search a rugged, remote mountainside.

One day after the China Eastern Airlines flight plunged from the sky, there are more questions than answers. China Plane Crash: No Survivors Found in Crash of Chinese Eastern Airliner, Says State Media.

WHAT CAUSED THE CRASH?

The cause is unknown. Flight 5735 was at 29,000 feet (8,800 meters) on Monday afternoon when it went into a dive about an hour into its flight, according to flight-tracking website FlightRadar24.com.

State media and Chinese regulators gave no indication the pilot reported trouble or other information that might shed light on the cause of the disaster.

Rescuers were looking for the plane's black box, which should contain information from instruments and sound from the cockpit.

Investigators have said after previous crashes that confirming the cause sometimes can require months or years due to the need to gather badly damaged debris and examine specialized technical factors.

HOW MANY PEOPLE WERE ABOARD? DID ANY SURVIVE?

The plane was carrying 123 passengers and nine crew members from the city of Kunming in China's southwest to Guangzhou, an export hub in the southeast.

No survivors had been found as rescuers searched the rugged, charred mountainside near the city of Wuzhou in the Guangxi region.

Relatives gathering at Baiyun Airport in Guangzhou were met by employees who wore full protective gear to guard against the coronavirus. Chinese news reports said five hotels with 700 rooms had been requisitioned closer to the crash site for family members.

IS THIS THE SAME BOEING MODEL INVOLVED IN EARLIER CRASHES THAT RESULTED IN ITS GROUNDING?

No. The plane that crashed was a Boeing 737-800, not the Boeing 737 Max, a newer model that was temporarily grounded worldwide following two deadly crashes in 2018 and 2019.

Boeing 737-800s have been flying since 1998 and are widely used. Boeing Co. has sold more than 5,100. They have been involved in 22 accidents that damaged the planes beyond repair and killed 612 people, according to the Aviation Safety Network of the Flight Safety Foundation in the United States.

China Eastern grounded all of its 737-800s after the crash, China's Transport Ministry said.

The Boeing 737 Max was grounded by regulators following the crashes in Indonesia and Ethiopia. They were blamed on a computer system that pushed the nose downward in flight and couldn't be overridden by pilots.

Airlines were allowed to resume using the 737 Max after Boeing redesigned the system in a process overseen by regulators from the United States, Europe, China and the Middle East.