England No-Fault Divorce Law: Here's All You Need To Know About The No Blame Divorce Law

The new law which came into effect on April 6 has been welcomed by experts who said that the 'No-Fault Divorce' law will aid couples to move forward. 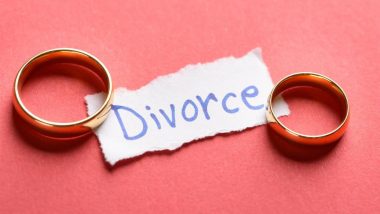 London, April 6: Married couples in England and across the United Kingdom will now be able to start the divorce proceedings without blaming each other as the 'No-fault divorce' legislation came into effect in England and Wales.

Interestingly, divorce laws in England have been changed for the first time in 50 years, thus putting an end to the 'blame game' that couples used to go through while seeking a divorce. Heatwave in India: Coconut Water Sales in Puducherry Decline As People Stay in Due to Soaring Temperatures.

The new law which came into effect on April 6 has been welcomed by experts who said that the 'No-Fault Divorce' will aid couples to move forward. They also opined that the new law will help couples secure the best outcomes, thereby eliminating unnecessary conflict and tension.

Previously, the ground for divorce in England was adultery, unreasonable behavior, or desertion. Couples could also get a divorce if both the partners lived separately for five years. Experts also believe that the no-fault divorce law will make divorce proceedings a much quicker process for couples.

On the other hand, one must note that the Divorce, Dissolution and Separation Act (2020) also allows couples to jointly file for divorce. However, under the new law, one partner contesting a divorce does not stand in the way of the other filing for divorce.

The new law in England and Wales brings them into line with Scotland, the United States, Australia, and Germany, which have their own legal system.

(The above story first appeared on LatestLY on Apr 06, 2022 11:20 PM IST. For more news and updates on politics, world, sports, entertainment and lifestyle, log on to our website latestly.com).