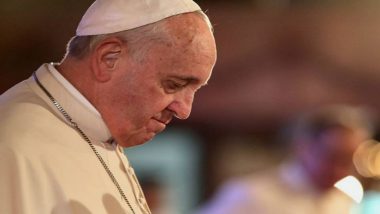 Vatican City, June 3: Pope Francis said on Wednesday "we cannot tolerate or turn a blind eye to racism", in reaction to the killing of a black man by US police that has sparked nationwide protests.

"Nothing is gained by violence and so much is lost," Francis said. Floyd, 46, an unarmed African-American man, suffocated as a white police officer kneeled on his neck, sparking once-in-a-generation demonstrations against systemic racism and police brutality.

The pope said he was praying for Floyd and "all those others who have lost their lives as a result of the sin of racism". Protests have been held in cities across the country, mostly peaceful but many descending into mayhem. Both activists and officials have blamed rabble-rousers for the trouble and thousands of people have been arrested.

(The above story first appeared on LatestLY on Jun 03, 2020 07:06 PM IST. For more news and updates on politics, world, sports, entertainment and lifestyle, log on to our website latestly.com).