Haiti's police chief has said four suspects behind the assassination of President Jovenel Moise have been shot dead. Two other suspects have been arrested. 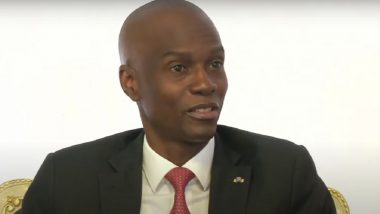 "Four mercenaries were killed, two were intercepted under our control. Three policemen who had been taken hostage have been recovered," said the director general of Haiti's national police Leon Charles in a televised statement. The police chief said a manhunt of the assassins was launched immediately after President Jovenel Moise was killed. US Says It is Ready to Help Haiti After Killing of Jovenel Moise.

Meanwhile, Haiti's Interim Prime Minister Claude Joseph called on the Haitian people to remain calm, asserting that the situation was under "control". He also announced the state of emergency or "state of siege" that allows for the banning of gatherings and use of the military for police roles, along with other extensions of executive powers.

Jovenel Moise had led Haiti, one of the poorest nations in the world, since 2017 but had faced widespread protests demanding his resignation. First Lady Martine Moise is being treated in hospital. UN Secretary-General Antonio Guterres has condemned "in the strongest terms" the assassination of the Haitian President, saying the perpetrators must be brought to justice.

(The above story first appeared on LatestLY on Jul 08, 2021 09:36 AM IST. For more news and updates on politics, world, sports, entertainment and lifestyle, log on to our website latestly.com).