Hikers Stranded Overnight on Indonesian Volcano Rescued After Being Stuck Due to 6.4 Magnitude Earthquake

Owing to a 6.4 magnitude earthquake that hit Mount Rinjani – Indonesia’s active volcano in the early hours of Sunday, at least 16 people died and more than 330 were injured. 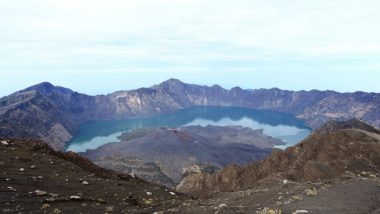 Owing to a 6.4 magnitude earthquake that hit Mount Rinjani – Indonesia’s active volcano in the early hours of Sunday, at least 16 people died and more than 330 were injured. With Mount Rinjani a favoured tourist spot, more than 500 hikers got stuck on various hiking routes that criss-cross the mountain due to landslides caused by the earthquake.

These hikers were trapped on the slopes of Rinjani overnight, and included citizens from the United States, France, the Netherlands, Thailand and Germany, as well as many other countries.

The national park authority said on Monday that a key route to the peak had been cleared. Hikers were also able to start descending the mountain after guides discovered an alternate route that was unaffected by the landslides. Authorities say the evacuation will most likely stretch into Tuesday. Hundreds of other hikers managed to get off the mountain on Sunday, according to officials.

Helicopters and search teams were deployed to scour the volcano’s slopes and drop food supplies for those stranded on the mountain. “For supplies, they can still survive for another one to two days,” Agus Hendra Sanjaya, spokesman for Mataram’s search and rescue agency, said.

According to Indonesia's national disaster management agency, 149 climbers are still believed to be stranded on the volcano itself, while 500 people are trapped in Sembalun Village on the volcano's slopes, and an additional 40 tourists are in nearby Batu Ceper.

Videos given to CNN by a Thai trekking group, Trekmania, who were on Rinjani when the earthquake struck show enormous clouds of dust covering the slopes of the mountain, triggered by the landslides.

Rising some 3,726 metres (12,224 feet) above sea level, Rinjani is the second-tallest volcano in Indonesia and a favourite among sightseers keen to take in its expansive views.

(The above story first appeared on LatestLY on Jul 30, 2018 10:16 PM IST. For more news and updates on politics, world, sports, entertainment and lifestyle, log on to our website latestly.com).