How New Zealand Defeated COVID-19: Timeline of The Kiwi Battle to Eliminate Coronavirus and Role Played by Jacinda Ardern

Ardern, 39, emerged an absolute winner on Monday as she announced the complete elimination of COVID-19 from New Zealand. The final active case has recovered, she said, adding that the restrictions will be relaxed to level 1 from Tuesday - which allows near complete re-opening of economy and resumption of all domestic tourism and hospitality services. 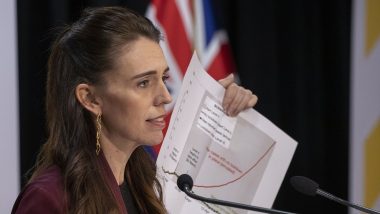 Auckland, June 8: New Zealand, a liberal democratic country which was frequented by tourists and immigrants right up till February when coronavirus broke out in the nation, has succeeded in defeating the contagious disease. Prime Minister Jacinda Ardern, who earned global fame for her response to Christchurch mosque attack, has once again proved to be a master of crisis management.

Ardern, 39, emerged an absolute winner on Monday as she announced the complete elimination of COVID-19 from New Zealand. The final active case has recovered, she said, adding that the restrictions will be relaxed to level 1 from Tuesday - which allows near complete re-opening of economy and resumption of all domestic tourism and hospitality services.

How NZ Defeated Coronavirus: A Timeline

The Pacific Island nation, inhabited by around 5 million, has succeeded in eliminating coronavirus at a time when several nations in the West - despite being equipped with a solid health infrastructure - are reeling under a prolonged crisis. Here's a timeline of the Kiwi battle against COVID-19.

The Ministry of Health confirmed the first case of coronavirus in New Zealand. Although the identity was not released, media reports said the individual had a recent travel history to Iran. Subsequently, the travel restrictions came into effect and all offshore returnees were subjected to thermal screenings.

A total nationwide lockdown, which barred the movement of all individuals except essential service providers, came into effect from the midnight of March 23. The lockdown lasted for seven weeks, and was strictly enforced in all parts of the country. By the time the shutdown was announced, New Zealand's tally of COVID-19 crossed 100.

The most crucial phase in coronavirus pandemic is the culmination of disease to its peak. Once the peak is reached, the infection rate begins sliding. On April 4, Health Director General Ashley Bloomfield announced that the country is likely witnessing the peak. The number of infections had then climbed to 950.

By the final week of April, New Zealand succeeded in preventing coronavirus from entering into the community transmission stage. This, said Jacinda Ardern, allowed the health authorities to begin the elimination of disease. The active hotspots were identified and carefully isolated, she stated, adding that if the country remains vigilant for next few days, the virus would be effectively eliminated.

In New Zealand's four-tier lockdown strategy, the government decided to bring the level of alertness to two. The decision was taken after no new cases were reported for three consecutive days, preceded by a minimal rate of infection over last two week. Shops, restaurants, cinemas, salon, cafes and playgrounds, along with some sectors of the economy, were allowed to re-open under social distancing norms.

The final active patient, a woman reported to be in her 50s who had contracted the infection in an Auckland cluster, recovered from the disease on June 8. On learning about her recovery, a wave of celebration spread across New Zealand. PM Ardern, during the press briefing, said she "danced" in her lounge along with daughter Neve after being informed about the patient's recovery.

To sum up, New Zealand's battle against coronavirus lasted from February 28 to June 8. The period saw a total of 1,504 cases. Out of them, 1482 successfully recovered and 22 patients succumbed to death. The toll of active infections was officially stated to be "zero" today.

Analysts lauded Ardern for being connected with New Zealanders throughout the crisis and placing her at the frontline to answer media questions and public queries. Instead of leaders of several democracies who aired a recorded statement to announce the imposition of lockdown, Ardern called for a press conference where she took more than a dozen questions after declaring a state of shutdown.

Despite a dynamic yet sensitive leadership, a massive credit for NZ's successful battle against coronavirus goes to the Kiwi populace. At a time when populists and liberals both - in several democracies - marked their discontent and hit the streets to protest against lockdown measures, New Zealanders decided to remain indoors and strictly adhere to the shutdown call for seven weeks.

The rigorous level of enforcement was reflected on May 15 - when a restaurant operating under level 2 of restrictions in Wellington - turned away Ardern and her partner when they arrived for a date. The seat was denied as the cafe had filled its capacity in accordance to the social distancing norms. The Prime Minister of a nation, being turned away from a restaurant, could explain why a lethal virus could not effectively penetrate in a population of 4,897,000 persons.

(The above story first appeared on LatestLY on Jun 08, 2020 09:02 PM IST. For more news and updates on politics, world, sports, entertainment and lifestyle, log on to our website latestly.com).