The RCEP came into force last November, with Singapore ratifying the agreement in April this year. Though India has pulled out of the 15-member country partnership in 2019, the country is rated as an important market of 1.38 billion people and a trading partner in the Asia Pacific economies. 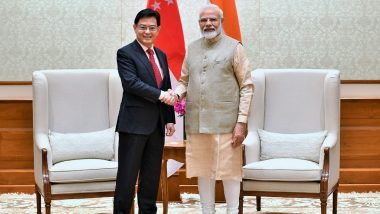 Singapore, August 11: India has an important role to play in contributing to the diversification of the global supply chain and making it more resilient, Singapore's Deputy Prime Minister Heng Swee Keat said on Wednesday and urged New Delhi to consider greater economic integration with Southeast Asia to unlock its vast potential.

Speaking at the opening session of the Confederation of Indian Industry (CII) annual meeting, which was held virtually, Heng also underlined the importance of India-Singapore Comprehensive Economic Cooperation Agreement, a broad base free trade agreement, The Straits Times newspaper reported.

Heng said that the South-east Asian region and India have many complementary strengths, adding that the jurisdictions should build on these to restore connectivity and enhance supply chains in the post-pandemic era.

"India has an important role to play in contributing to the diversification of the global supply chain and making it more resilient," Heng was quoted as saying in the report. "Indian companies have the capability, scale and resources to serve more than just its domestic market, huge as it is," Heng said. China's 3-Child Policy to 'Aggravate Problems' for Working Women: Think Tank.

The session was moderated by Dr Naushad Forbes, co-chairman of India-headquartered engineering firm Forbes Marshall and former president of CII.

Heng said it is important for the ASEAN and India to enhance digital connectivity, and reiterated that the door remains open for India to join the Regional Comprehensive Economic Partnership (RCEP) when the country is ready.

The RCEP came into force last November, with Singapore ratifying the agreement in April this year. Though India has pulled out of the 15-member country partnership in 2019, the country is rated as an important market of 1.38 billion people and a trading partner in the Asia Pacific economies.

The RCEP, which is the world's largest trade pact, involves all 10 members of the Association of Southeast Asian Nations (ASEAN) along with Australia, China, Japan, New Zealand and South Korea. Heng noted that Singapore is keen to partner India to better integrate their digital economies and collaborate in new areas like fintech and sustainability.

"As more activities go digital as a result of the pandemic, there is even greater impetus to accelerate our efforts to integrate our digital realms, and enable the more seamless flow of data, services and payments," the Singapore daily quoted Heng conveying the technology message to the Indian business community.

One initiative is a partnership between Singapore's Network for Electronic Transfers (NETS) and India's National Payments Corporation to facilitate offline and online merchant transactions. Singapore is pursuing growth in urban solutions and agri-tech, with many opportunities that can be jointly explored by businesses in both nations, he added.

Heng, who is also Coordinating Minister for Economic Policies, highlighted how India has made great strides to improve its business climate and attract foreign investments, rising to 63rd in the World Bank's Ease of Doing Business Index last year. It was ranked 142nd in 2014.

The improved regulatory climate has benefited Indian industries, including its tech sector. The country now has nearly 60 tech unicorns, or start-ups valued at over USD 1 billion, such as food delivery player Zomato and payments platform Pine Labs.

India's young population can translate into a significant demographic dividend if it can make the most of new opportunities and equip its people to take on these jobs, he said. "I look forward to the greater momentum for reform, innovation and human capital development in India."

The deputy premier noted that the India-Singapore Comprehensive Economic Cooperation Agreement (CECA) has benefited the two countries since it was signed in 2005, with growth in bilateral trade. Singapore has been India's largest source of foreign direct investments in recent years, and India's investment in the country has also increased. China Sentences Canadian Businessman Michael Spavor to 11 Years in Case Linked to Hauwei.

The cooperation between the two countries was also reinforced when COVID-19 struck, Heng said, with India keeping the supply chain for essential goods open and Singapore donating medical supplies during India's second wave of infections.

"As we seek to emerge from the pandemic and navigate towards a new normal, Singapore and India can build our strong relationship to even greater heights," he added. The two-day annual CII meeting, which is expected to draw about 6,000 guests including India's political and business leaders as well as CII members and partners, ends on Thursday.