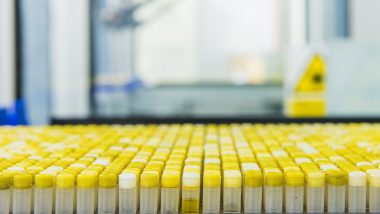 Tel Aviv, April 27: Dozens of people in Israel experienced heart inflammation after receiving the COVID-19 vaccine developed US pharmaceutical giant Pfizer in collaboration with German biotech company BioNTech. Israel is examining whether the cases are linked with Pfizer-BioNTech's COVID-19 vaccine, while the US company said there is no evidence to suggest a connection. Israel Issues Travel Warning for India and Six Other Countries over COVID-19.

According to a report by Channel 12, 62 incidents of inflammation of the heart muscle, or heart-muscle membrane have been identified by the Israeli government. The particular condition developed in one out of 1,00,000 people who received the Pfizer-BioNTech's shot, reported Bloomberg. This emerged during a study conducted by the Israel's health ministry. Two people died and the rest recovered. Israel Honors Pfizer Chief at Independence Day Celebrations.

However, the health ministry told Bloomberg that the study did not show with certainty that there's a higher rate in mortality or an increase in heart muscle inflammation cases. Reacting to the reports, Corona Commissioner Nachman Ash said health officials are investigating whether the cases are connected with the vaccine.

"It looks like the benefit of the vaccine is so great that even if we do find a connection between some of the cases and the vaccine, it won't be justified to take any action regarding the vaccine," Ash said on Sunday in an interview with Radio 103FM. Pfizer also reacted to the reports and said the company is aware of the Israeli cases of myocarditis.

"We have not observed a higher rate of myocarditis than what would be expected in the general population. A causal link to the vaccine has not been established. There is no evidence at this time to conclude that myocarditis is a risk associated," the company said.

(The above story first appeared on LatestLY on Apr 27, 2021 11:25 AM IST. For more news and updates on politics, world, sports, entertainment and lifestyle, log on to our website latestly.com).