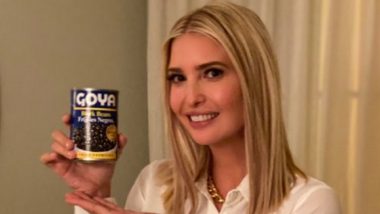 Washington, July 15: Ivanka Trump, daughter of US President Donald Trump, sparked a row after she a tweeted an image of her with a can of Goya Beans. The tweet raised questions over violation of Federal Ethics Law as Ivanka, apart from being a resident of the White House, is also the Special Advisor of the President.

Influential voices on social media alleged conflict of interest, claiming that the tweet of Ivanka promotes a private company. Not only did shared her photo with a can of Goya product, but also posted a caption in English and Spanish which read as follows: "If it’s Goya, it has to be good. Si es Goya, tiene que ser bueno." US Presidential Election 2020: Donald Trump Confident of Winning November Polls.

Incidentally, her social media post also came days after Goya CEO Robert Unanue praised the leadership of Trump in America amid the COVID-19 crisis. His remarks had led to a #BoycottGoya campaign on social media. But Unanue struck back at Trump detractors, saying that they want to suppress free speech.

White House advisor Ivanka Trump promoting Goya seems like it could raise potential ethics issues since executive branch employees other than the president are prohibited from using public office "for the endorsement of any product, service or enterprise" https://t.co/2wFzP8Uez8

'Ethics Rules Do Not Allow It'

Senior advisor to the President endorsing a product - using the company’s own advertising line. Ethics rules do not allow it - and pretty much unimaginable in previous administrations. https://t.co/j3GjFfS1Em

According to Walter Shaub, former Director of US Office of Government Ethics, said Ivanka may had not violated the rules if her purported promotional tweet would had not come in the backdrop of Goya CEO praising her father and President of the country.

"If you use that social media account to tout a company's product a few days after the company's CEO publicly praised your father-president from the White House rose garden, that's one more factor weighing against you -- and a particularly strong one at that," he tweeted.

"f you tout the company's product in an obvious response to the backlash the company is facing for the CEO's remarks about your father-president, you knowingly link your account in people's minds to your official activities; you create the appearance of official sanction," Shuab further added.

(The above story first appeared on LatestLY on Jul 15, 2020 11:45 PM IST. For more news and updates on politics, world, sports, entertainment and lifestyle, log on to our website latestly.com).