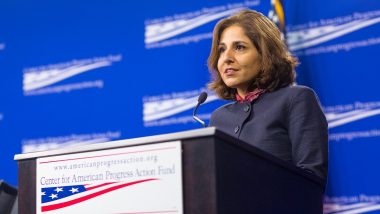 New York, November 30: US President-elect Joe Biden on Monday announced key members of his "crisis tested" economic team including Janet Yellen as Secretary of the Treasury, Neera Tanden as Director of the Office of Management and Budget, and Wally Adeyemo as Deputy Secretary of the Treasury. Joe Biden Suffers 'Hairline Fractures' in Foot, Will Need Walking Boot: Doctor.

Below is the extract on Neera Tanden, the first ever Indian-American tipped to lead the Office of Management and Budget:

"Neera Tanden currently serves as President & CEO of the Center for American Progress, an organization dedicated to advancing policies that increase opportunity for every American. A veteran of multiple presidential administrations, Tanden has been a leading architect and advocate of policies designed to support working families, foster broad-based economic growth, and curb inequality throughout her career. Her experience as a child relying on food stamps and Section 8 housing -- a social safety net that offered her single mother the foundation she needed to land a good job and punch her family's ticket to the middle class -- instilled in her the true necessity of an economy that serves the dignity and humanity of all people. If confirmed, Tanden would be the first woman of color and the first South Asian American to lead the OMB.

"Prior to her tenure as President & CEO, Tanden held the post of Chief Operating Officer at the Center for American Progress. She currently serves on the New Jersey Restart and Recovery Commission, and previously served as senior adviser for health reform at the US Department of Health and Human Services developing policies and provisions of the Affordable Care Act, as director of domestic policy for the first Obama-Biden presidential campaign, and in a variety of other roles in government and on the campaign trail. A native of Bedford, Massachusetts, Tanden received her bachelor of science degree from UCLA and her JD from Yale Law School."

(The above story first appeared on LatestLY on Nov 30, 2020 09:00 PM IST. For more news and updates on politics, world, sports, entertainment and lifestyle, log on to our website latestly.com).