Canada Prime Minister Justin Trudeau on Saturday once again extended support to the farmers' protesting in India against the recently-enacted farm laws ignoring India's warning, "Canada will always stand up for the right of peaceful protests anywhere around the world," he said. 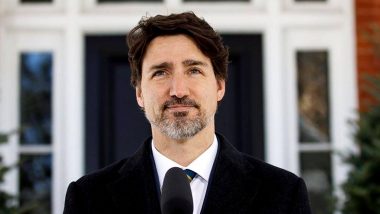 The Canada PM in response to reporters question about India's warning, said, "Canada will always stand up for the right of peaceful protests anywhere around the world. And we are pleased to see moves towards de-escalation and dialogue." India Warns Canada of Serious Damage to Bilateral Relations Over Justin Trudeau's Comments.

Thousands of Indian farmers protesting against new agricultural laws were allowed to enter New Delhi after they clashed with police on the outskirts of the capital@NehaPoonia reports https://t.co/uMkVqMgRGk pic.twitter.com/rBMuANv63s

On Friday, the Centre warned the Canadian government of serious damage to bilateral relations if it continued to interfere in India's domestic matters. The ministry of external affairs on Friday summoned the Canadian High Commissioner and slammed the Justin Trudeau government over its recent support to farmers' agitation in Punjab and Haryana. Justin Trudeau Backs Farmers' Protest in India, Says 'Canada Will Always Defend the Rights of Peaceful Protest'.

Earlier this week also, Trudeau extended support to the farmers' protest. He had said, "I would be remiss if I didn't start by recognising the news coming out of India about the protests by farmers. The situation is concerning, and we are all very worried about family and friends. I know that's the reality for many of you."

Meanwhile, the fifth round of talks between farmers representative and the Centre is currently underway at New Delhi's Vigyan Bhawan. The three controversial farm laws were enacted in September this year. These laws triggered countrywide protests by farmers, especially from Punjab and Haryana as they feared that these laws would dilute the minimum support price system of their farm produce.

(The above story first appeared on LatestLY on Dec 05, 2020 04:55 PM IST. For more news and updates on politics, world, sports, entertainment and lifestyle, log on to our website latestly.com).