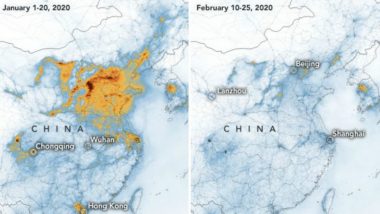 NASA maps show falling levels of nitrogen dioxide over China last month due to economic slowdown caused by the virus.

"There is evidence that the change is at least partly related to the economic slowdown following the outbreak of coronavirus," the US space agency said in a statement on Saturday. COVID-19 Outbreak: South Korea Reports 376 More Coronavirus Cases, Total 3,526.

According to research scientist Fei Liu, "This is the first time I have seen such a dramatic drop-off over such a wide area for a specific event".

Striking look from NASA at reduction in pollutants in China from economic slowdown https://t.co/OFpx0f2A3Y pic.twitter.com/BxSpw76DVg

There has been a considerable decline in China's factory activity as manufacturers shunned work to contain the spread of coronavirus.

NASA's Earth Observatory said that "While the Lunar New Year may have played a role in the recent drop-off, researchers believe the decrease is more than a holiday effect or weather-related variation".

This is, however, not the first time air pollution levels have come down so drastically in China.

"Scientists also observed a significant reduction around Beijing during the 2008 Olympics, but the effect was mostly localised around that city, and pollution levels rose again once the Olympics ended," said NASA.

(The above story first appeared on LatestLY on Mar 01, 2020 11:09 AM IST. For more news and updates on politics, world, sports, entertainment and lifestyle, log on to our website latestly.com).