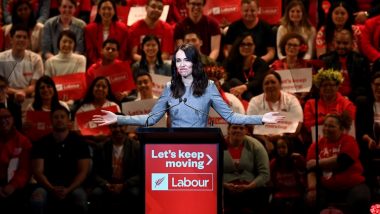 Wellington, October 17: The counting of votes is over in New Zealand, and since the country follows a mixed proportional representation system, it can be concluded that Prime Minister Jacinda Ardern's Labour party will form a single-majority government. With a vote share of 50.8 percent - which may rise after the final tally is released - the party will have at least 61 lawmakers in the 119-member Parliament. How New Zealand Defeated COVID-19: Timeline of The Kiwi Battle to Eliminate Coronavirus and Role Played by Jacinda Ardern.

The results were largely on expected lines, but few had predicted Ardern's showing to be strong enough to allow the Labour in foregoing coalition partners for forming the government. Unlike 2017, the second Ardern-led regime would not depend on the support of NZ First and Greens.

Leader of the National, Judith Collins, who had projected herself as the prime ministerial candidate, was quick to concede defeat. She called up Ardern within minutes after the early trends arrived, and congratulated her on the "outstanding win". The Prime Minister reciprocated the gesture in her first remarks following the results, reiterating that she will be the PM of "every New Zealander" irrespective of their political or ideological affiliations.

(The above story first appeared on LatestLY on Oct 17, 2020 05:12 PM IST. For more news and updates on politics, world, sports, entertainment and lifestyle, log on to our website latestly.com).