Over 300 Elephants Mysteriously Dead in Botswana in Two Months 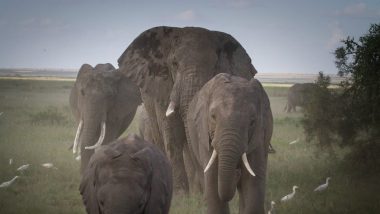 Gaborone, July 2: Mystery surrounds the "completely unprecedented" deaths of hundreds of elephants in Botswana over the last two months, a media report said.

No one knows why the animals are dying, with lab results on samples still weeks away, the BBC report said on Wednesday citing the government as saying. Botswana is home to a third of Africa's declining elephant population.

Niall McCann of the UK-based charity National Park Rescue, told the BBC that his colleagues in the southern African country had spotted more than 350 elephant carcasses in the Okavango Delta since the start of May.

Local conservationists first alerted the government in early May, after they undertook a flight over the delta.

"A month later, further investigations identified many more carcasses, bringing the total to over 350.

"This is totally unprecedented in terms of numbers of elephants dying in a single event unrelated to drought," he told the BBC.

In May, Botswana's government ruled out poaching as a reason, noting the tusks had not been removed. There are other things which point to something other than poaching.

"It is only elephants that are dying and nothing else," McCann told the BBC, adding: "If it was cyanide used by poachers, you would expect to see other deaths."

He has also tentatively ruled out natural anthrax poisoning, which killed at least 100 elephants in Bostwana last year.

(The above story first appeared on LatestLY on Jul 02, 2020 06:14 PM IST. For more news and updates on politics, world, sports, entertainment and lifestyle, log on to our website latestly.com).