Pakistan's relevant authorities have seen no evidence yet that there is an international conspiracy to topple Pakistan Prime Minister Imran Khan through a vote of no-confidence motion moved by the opposition parties, Express Tribune reported. 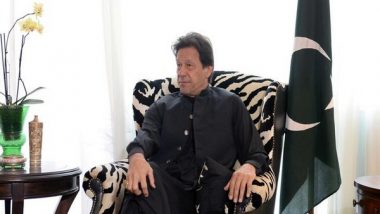 Islamabad, March 29: Pakistan's relevant authorities have seen no evidence yet that there is an international conspiracy to topple Pakistan Prime Minister Imran Khan through a vote of no-confidence motion moved by the opposition parties, Express Tribune reported.

Imran Khan, in his speech at the public rally on Sunday, claimed that there was a "foreign-funded plot" being hatched against his government. He showed a letter, but without divulging its contents, as evidence of the existence of the conspiracy aimed at toppling his government. Khan insisted that efforts were being made to seek his ouster since he pursued an "independent" foreign policy. Pakistan: Voting on No-Confidence Motion Against Imran Khan To Be Held on April 3.

Since his revelations, many questions are being asked including whether the letter was written by any country or was it an internal assessment shared by one of the foreign diplomatic missions of Pakistan.

The "threatening letter" was also shared with the military leadership, according to Foreign Minister Shah Mahmood Qureshi. But relevant quarters revealed that they had "no knowledge" of any such plot and neither did they see any evidence, Express Tribune reported.

One source, whose department deals with external threats, said if there had been an imminent threat, certain actions would have been taken by now. But there was no "unusual movement" nor any other action taken by the concerned authorities against the backdrop of the purported foreign-funded plot, the report said.

Another source added that if the threat was so serious, why was the meeting of the National Security Committee (NSC) not called immediately. It is believed that concerned quarters and some officials in the Foreign Office were upset that even if there was a certain plot, the premier should have taken up the issue at the relevant forums instead of raising the subject in public, Express Tribune reported.

The Prime Minister, under oath, is not allowed to divulge details in public that have been shared with him as the country's chief executive. Some say his effort to raise the issue in public is tantamount to violating his oath of office, the report said.

(The above story first appeared on LatestLY on Mar 29, 2022 10:58 PM IST. For more news and updates on politics, world, sports, entertainment and lifestyle, log on to our website latestly.com).