The apex court issued the directives as it resumed its hearing on the legality of the ruling by NA Deputy Speaker Qasim Khan Suri on the no-confidence resolution that took place on Sunday, reports Dawn news. 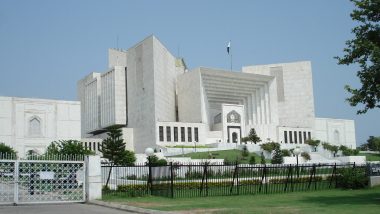 The apex court issued the directives as it resumed its hearing on the legality of the ruling by NA Deputy Speaker Qasim Khan Suri on the no-confidence resolution that took place on Sunday, reports Dawn news.

On Monday, the CJP had remarked that the court would issue a "reasonable order on the issue", but the hearing was adjourned after Farooq H. Naek, the counsel of the Pakistan Peoples Party (PPP) and other opposition parties, presented his arguments.

At the outset of Tuesday's hearing, PPP Senator Raza Rabbani noted how, according to media reports the Election Commission of Pakistan (ECP) had said it was not possible to hold general elections within three months.

However, the ECP has denied issuing any statement concerning elections.

He also said that the court had to examine the extent of the "immunity" of parliamentary proceedings.

"Whatever has happened can only be termed as civilian martial law," he said.

He maintained that Suri's ruling was "illegal", adding that it could not be contradictory to the Constitution.

"The no-confidence motion can't be dismissed without voting on it," he said, citing Article 95 of the Constitution.

Rabbani also said that a deliberate attempt was made to construct a narrative against the no-trust move while a foreign conspiracy was also touted, Dawn reported.

He also maintained that it was wrong of Suri to term opposition lawmakers as traitors without providing any evidence.

A no-confidence motion was also submitted against NA Speaker Asad Qaiser which limits the power of the speaker, he said, adding that assemblies could not be dissolved during the no-confidence process.

He urged the court to dismiss the deputy speaker's ruling and to restore the NA, adding that the minutes of the National Security Committee and the 'threat letter' should also be presented.

(The above story first appeared on LatestLY on Apr 05, 2022 04:11 PM IST. For more news and updates on politics, world, sports, entertainment and lifestyle, log on to our website latestly.com).