Pakistan: Tehreek-E-Taliban Warns Govt, Says Thier Fighters Will Wage Countrywide Jihad if Govt Does Not Fulfill Their Demands

The Pakistan Tehreek-e-Taliban (TTP) commonly known as Pakistan Taliban has accused Islamabad of sabotaging the ongoing peace negotiations. The proscribed group also warned that if its demands were not met, it would be forced to call off the indefinite ceasefire. 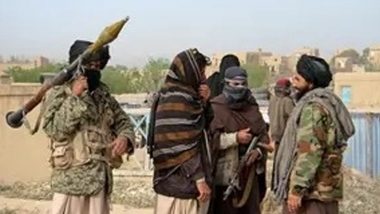 New Delhi, June 25: The Pakistan Tehreek-e-Taliban (TTP) commonly known as Pakistan Taliban has accused Islamabad of sabotaging the ongoing peace negotiations. The proscribed group also warned that if its demands were not met, it would be forced to call off the indefinite ceasefire.

"If the Pakistan government wants to flee from meaningful negotiations, then we have no problem. We will wage a countrywide jihad," the TTP said in a statement. The group also refused to hold talks under the framework of the Pakistani constitution, as it was not based on Sharia law.

"Our Mujahideen will have the opportunity to wage jihad in the country since freedom and sovereignty are our rights as are practicing our religious and national values" says the statement . It added that "TTP members will never give up arms and surrender."

The TTP leaders also made it clear that their demand for reversal of FATA merger is non-negotiable and it was made clear to the negotiators of the Pakistani security establishment. Taliban Rejects Report on Human Rights Violations in Afghanistan.

"They (Pakistan army) had assured us in the beginning of the fresh talks that demerger of the FATA region will be done and we will be free to implement Sharia laws in our land but if they want to back off, we will have no other option but to fight them off but we will never surrender or disarm and will continue to fight Pakistani security forces in case of no agreement." In 2018, the Imran Khan government merged the FATA, a lawless tribal area into the more tightly administered Khyber Pakhtunkhwa province, curbing TTP's free movement in the area.

The Pakistani Interior Minister Rana Sanaullah has termed the demands of the Tehreek-e-Taliban Pakistan (TTP) pertaining to the reversal of FATA merger and military withdrawal from tribal areas bordering Afghanistan as against the constitution, saying that "talks are possible with only those who are willing to surrender their arms".

Referring to the Taliban's Interior Minister and the "patron" of the TTP, Sirajuddin Haqqani's participation in the ongoing talks, Sanaullah told the Pakistani army leadership that if "Afghanistan's political leaders are participating in the talks, then politicians from our side will also take part in the negotiation."

It may be recalled that the Pakistani establishment started the secret negotiations with the TTP on the assurances given by the Interior Minister of Taliban regime, Sirajuddin Haqqani that he would be using all his power to make the talks successful. However, it has been a month and the two sides have yet to find common ground on the main demands.

Earlier on Wednesday, the top military brass had briefed Prime Minister Shehbaz Sharif led civilian government and had assured the political leadership that no extra-constitutional concessions would be given to the militants and any deal arrived at would be subject to parliamentary approval. The meeting, the first of its kind since the coalition government came to power, was called after the many coalition partners including PPP protested that the civilian leadership was being sidelined in the ongoing negotiations with the militants.

According to sources, the former ISI chief and the Corp Commander of Peshawar Faiz Hameed who is the chief negotiator from the army side was questioned about the "secret" talks by the government. He was told that there is no question of "pardoning" the hardcore militants of the TTP who have been sentenced to death or lifer by the Pakistani courts.

Pakistani watchers say the latest statements by the TTP are nothing but attempts at gaining time to regroup their cadres.

"Talks with TTP are destined to fail as militants are openly declaring to not submit to the constitution. Even today, TTP is threatening to attack Pakistan and the Pakistani army is silent. It is very shameful." said Rana Shabbir Hussain, a Pakistani analyst.

Some Pakistani watchers believe that the Pakistani security establishment has been committing blunder after blunder in its approach to deal with the TTP.

(The above story first appeared on LatestLY on Jun 25, 2022 08:02 PM IST. For more news and updates on politics, world, sports, entertainment and lifestyle, log on to our website latestly.com).