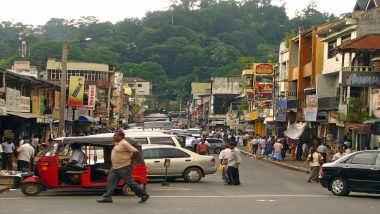 Colombo, June 29: Sri Lanka has decided to delay reopening the country to foreign tourists by at least two weeks, but lifted its nationwide curfew on Monday as the island-nation prepares to hold parliamentary elections in the coming weeks.

The island nation was initially planning to open its international airports to tourists on August 1, but has now decided to give priority to repatriate stranded Sri Lankans.

"We want to restart tourism as soon as possible. But more than 46,000 Sri Lankans have registered with the government and are waiting to return. We want first ensure that they are back," Tourism Minister Prasanna Ranatunga told Efe news.

The government has laid down rules for foreign travellers entering the country after the airports reopen.

Tourists will have to produce a negative PCR report taken within 72 hours prior to their arrival on the island, followed by a second one after landing, and a third if they stay for more than 10 days.

Moreover, visitors will have to undergo another PCR test if they develop symptoms of Covid-19 infections during their stay in the country.

The authorities had declared a nationwide lockdown on March 20 to check the spread of the novel coronavirus.

The government took the decision to completely lift the curfew as there were no records of new COVID-19 cases at the community level, and with an eye on the upcoming general elections on August 5, an official from the Police Media Division told Efe news

He added that all the cases that have been recorded at the moment were from two major clusters - the Sri Lankan Navy and those returning from abroad.

"Even though the curfew is completely lifted people will not be able to gather in large groups as they did before COVID-19. People will have to follow health guidelines as recommended by the Health Ministry," said the official.

The authorities also announced that people who fail to wear masks would be ordered to self-quarantine for 14 days.

Senior Police DIG of the Western Province, Deshabandu Tennakoon, said this decision was taken because people were flouting recommendations to wear masks in public.

"Over 19,000 people were stopped by the police for not wearing a mask or wearing it in the wrong way on Friday," underlined Tennakoon.

As of late Sunday, Sri Lanka had recorded almost 2,000 total COVID-19 cases, with 11 deaths, according to the Health Promotion Bureau. Only around 360 of the cases were active.

(The above story first appeared on LatestLY on Jun 29, 2020 02:20 PM IST. For more news and updates on politics, world, sports, entertainment and lifestyle, log on to our website latestly.com).