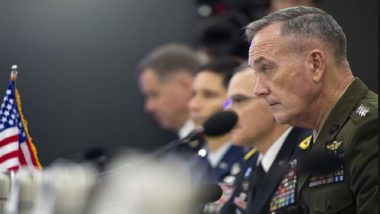 Washington, March 16: Highlighting the pitfalls that follow the generous loans that China has been disbursing to countries participating in its One Belt-One Road (OBOR) Project, General Joseph Dunford, Chairman of US Joint Chiefs of Staff cited Pakistan’s debt-ridden economy as an example. General Dunford revealed that Pakistan owes its "all weather friend" China at least US $10 billion debt for the construction of the Gwadar port and other projects, as the top US general underlined Beijing's "predatory economics" to expand its global influence.

The strategic Gwadar Port in Balochistan province on the Arabian Sea is being built by China under the multi-billion China-Pakistan Economic Corridor (CPEC) and is considered to be a link between Beijing's ambitious OBOR and Maritime Silk Road projects. "Pakistan owes China at least US $10 billion in debt for the construction of Gwadar Port and other projects," Dunford said. "China is diligently building an international network of coercion through predatory economics to expand its sphere of influence," he said, adding that nations around the globe are discovering the hard way that China's economic "friendship" via OBOR can come at "a steep cost" when promises of investment go unfulfilled and international standards and safeguards are ignored.

Pakistan has been in talks with the International Monetary Fund for a bail-out package worth at least US $12 Billion as Imran Khan’s government is faced with an exhausted foreign reserve as well as interest payments due on various loans.

General Dunford then moved on to another country in India’s neighbourhood that has signed up to China’s OBOR project – Sri Lanka. "Let us look at just a few examples. Saddled with predatory Chinese loans, Sri Lanka granted China a 99-year lease and 70 per cent stake in its deep-water port," he told a Senate Armed Services Committee on Thursday.

Similarly, Maldives owes China roughly USD 1.5 billion in debt - about 30 per cent of its GDP - for construction of various infrastructure projects, he said.

In Africa, Djibouti owes China over 80 per cent of its GDP and in 2017, the country became host to China's first overseas military base. In Latin America, Ecuador agreed to sell 80 to 90 per cent of its exportable crude oil to China through 2024 in exchange for USD 6.5 billion in Chinese loans, he said. And after leasing land tax-free to China for 50 years, Argentina is denied access and oversight to a Chinese satellite tracking station on its sovereign territory, unwittingly allowing the facility's use for military purposes, the US general said.

Dunford warned that if China's predatory debt tactics is left un-addressed, it will have serious implications on the US's military. Alleging that China is extending its reach by increasing its overt military and coercive activities through its neighbours, Dunford said China's increasingly provocative behaviour in the Indo-Pacific, particularly the South China Sea (SCS), should concern all.

Between 2013 and 2018, China increased its air and sea incursions into the SCS twelve-fold. Within those five years, it also increased deployments of offensive and defensive weapons systems to the SCS by the same order of magnitude, he said.

China's land reclamation and militarisation far exceed that of other claimants combined in the South China Sea, he said.

Between 2013 and 2015 alone, China created more than 3,200 acres in the SCS, building features within its self-proclaimed 'nine dash line' - a claim the Permanent Court of Arbitration in The Hague ruled in 2016 has no legal basis, Dunford told the lawmakers.

Dunford also accused China of interfering in the freedom of navigation of ships in its neighbourhood. "China habitually threatens this freedom, using both conventional military force projection and 'gray zone' or irregular warfare activities," he said.

Citing an example, he said Chinese military vessels came dangerously close to the USS Decatur, a destroyer of the US Navy, off the coast of the Spratly Islands in the South China Sea. "China's force projection inside and outside the SCS disrespects and undermines our rules-based international order and threatens regional stability and security," Dunford said. (With PTI inputs)

(The above story first appeared on LatestLY on Mar 16, 2019 12:18 AM IST. For more news and updates on politics, world, sports, entertainment and lifestyle, log on to our website latestly.com).