The Sui Dhaaga actor took to her Instagram handle and shared some throwback pictures from her photo gallery along with the sweetest caption. 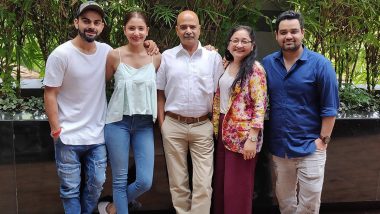 Celebrating the occasion of her father's 60th birth anniversary, Bollywood actor Anushka Sharma on Thursday penned a heartfelt note for him. The Sui Dhaaga actor took to her Instagram handle and shared some throwback pictures from her photo gallery along with the sweetest caption. Anushka wrote, "Celebrating 60 glorious years of the most unique 1961 special edition - my papa, Growing up he taught us the power of honesty, compassion, acceptance and righteousness. And always stressed upon the peace of mind that follows by being honest and hassle free." Virat Kohli And Anushka Sharma Along With Their Daughter Vamika Reach Pune Ahead Of India Vs England ODI Series (View Pics).

Expressing her love for her dad, she further added. "Inspired me in so many more ways than he knows! Supported me like I will never be able to reciprocate. And loved me like only he can. Love you papa. Happy 60th Birthday to you." The pictures included so me unseen photographs of Anushka's childhood along with her parents, some photos of her father during his younger days, Virat and Anushka spending time with Anushka's parents. Virat Kohli and Anushka Sharma Dazzle in this Behind the Scene Video from an Ad Shoot.

However, the picture that caught the most attention was a silhouette shot, that featured Anushka's father Ajay Kumar Sharma with his little granddaughter Meanwhile, currently, Anushka is embracing motherhood after welcoming her first child with Indian skipper Virat Kolhi. The couple was blessed with a baby girl named Vamika. The actor has been away from the limelight for the past two years. She was last seen in 'Zero' with Shah Rukh Khan and Katrina Kaif. She has recently produced two acclaimed projects - Amazon Prime Video web series 'Pataal Lok' and Netflix movie 'Bulbul'.