Apple Steps Up Encrytion to Thwart Police Cracking of IPhones

Apple has said it was strengthening encryption on its iPhones to thwart police efforts to unlock handsets without legitimate authorization. 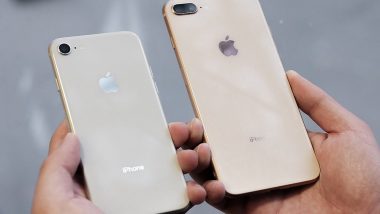 A silver iPhone 8 alongside a gold 8 Plus (Photo: Wikimedia Commons)

Washington: Apple has said it was strengthening encryption on its iPhones to thwart police efforts to unlock handsets without legitimate authorization.

The move by Apple, the latest in an ongoing clash with law enforcement, comes amid reports of growing use of a tool known as GrayKey which can enable police to bypass iPhone security features.

The privacy standard-bearer of the tech industry said it will change default settings in the iPhone operating system to cut off communication through the USB port when the phone has not been unlocked in the past hour.

That port is how machines made by forensic companies GrayShift, Cellebrite and others connect and get around the security provisions that limit how many password guesses can be made before the device freezes them out or erases data. Now they will be unable to run code on the devices after the hour is up.

Apple said that after it learned of the techniques, it reviewed the iPhone operating system code and improved security. It decided to simply alter the setting, a cruder way of preventing most of the potential access by unfriendly parties.

With the changes, police or hackers will typically have an hour or less to get a phone to a cracking machine. That could cut access by as much as 90 per cent, security researchers estimated.

Apple said yesterday that the new features are not designed to frustrate law enforcement but prevent any bypassing of encryption by good or bad actors.

"At Apple, we put the customer at the center of everything we design," the company said in a statement.

"We're constantly strengthening the security protections in every Apple product to help customers defend against hackers, identity thieves and intrusions into their personal data. We have the greatest respect for law enforcement, and we don't design our security improvements to frustrate their efforts to do their jobs." Apple said it was working a fix to mitigate the possibility of accessing data from GrayKey or similar tools.

Apple said that it has a team that responds to law enforcement and national security requests 24 hours a day. But the company has been a target of some in law enforcement for rejecting efforts to allow easy access to iPhones.

Two years ago, Apple went to court to block an FBI effort to force it to weaken iPhone encryption on the device of a mass shooter in San Bernardino, California, but officials dropped the case after finding a tool to unlock the phone. (With Agency inputs)

(The above story first appeared on LatestLY on Jun 14, 2018 04:32 AM IST. For more news and updates on politics, world, sports, entertainment and lifestyle, log on to our website latestly.com).