Get latest articles and stories on Business at LatestLY. Sqing Solutions has announced the release of Quizina, India's first homegrown live quiz app that allows you to learn and earn, in early October 2021. 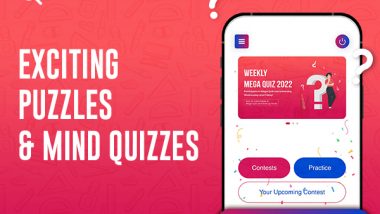 Quizina is an Android app that allows users to log in and take quizzes to improve their knowledge and win rewards in wallet credit.

Quizina is a mobile version of the super-popular TV show Kaun Banega Crorepati, which is a desi version of Who Wants to Be a Millionaire. The app hosts weekly quizzes and monthly mega quizzes, allowing users to earn more rewards.

On July 15th, the app released a new section called the PRACTICE SESSION, which will help users gain more knowledge and earn more rewards. The practice session is identical to the main quiz, with five levels of difficulty. The questions will be more difficult depending on the level.

Quizina differs from other quiz apps because it offers quizzes on an array of subjects, including Bollywood, history, science, and so on. The user can take a quiz in any category that they are comfortable with or are good at. The ability to choose from a variety of categories allows users to earn more rewards.

Quiz apps have gained popularity over time, and people want to earn rewards on these types of apps. This is a current success within Sqing Solutions' vision of empowering people to rework their social capital into financial independence using their current knowledge.

Since its launch in October 2021, the platform has received 60,000 downloads, and the number of paid users is rapidly increasing. It is claimed that over 6,500 concurrent paid users participate on a daily basis. Quizina is rapidly expanding in Tier 2 and Tier 3, with the majority of traffic coming from these cities, where it is expected to surpass half a million downloads. The app is currently available in English and has just been released in Hindi for the same.

Sonu Raju, Founder of Quizina, says "As we embark on an existing journey to transition from traditional pen and paper quizzes to more modern technology--and thus win rewards and gain knowledge,"

The Quizina team believes that it should be a more user-friendly app for users, allowing them to play the quiz and earn more knowledge and rewards at their fingertips. They also believe that they are building on an existing mission to create knowledge as well as a technology-led platform that rewards people for improving their knowledge. The team wishes to give everyone who owns a smartphone equal access to this quiz.

This story is provided by SRV. ANI will not be responsible in any way for the content of this article. (ANI/SRV)