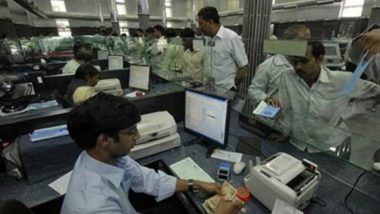 Lucknow, April 3: Additional Chief Secretary Home Awanish Kumar Awasthi on Friday said on the directions of Chief Minister Yogi Adityanath all banks in the state will remain open on Mahavir Jayanti and Good Friday during the lockdown period. Banks will remain open on two public holidays on the instructions of the chief minister on Mahavir Jayanti and Good Friday -- April 6 and 10 -- so that the beneficiaries of various schemes who have been given financial aid face no problems, he said.

The ACS said information was received about the presence of some people who attended the Tablighi Jamaat congregation in Delhi's Nizamuddin, following which the entire area has been sealed and every house is being searched. Bank Holidays in March 2020: Banks to Remain Closed on These 12 Days This Month For Holi, Ugadi And Gudi Padwa; Check Full List Here.

The police commissioner is personally monitoring the searches in every house of the area which is being sanitised, Awasthi said, adding that the campaign of this kind was underway in the entire state. Awasthi said as per the Supreme Court order, it has been decided to release the juvenile offenders and the chief minister has directed to release 248 juveniles.

"So far, 9,137 prisoners have been released on bail and parole in the state. Apart from this, to strengthen law and order, the chief minister has directed the DGP to make extensive use of drones," the ACS said.

On the appeal of Adityanath, many people have come forward and offered financial assistance to the government to deal with the crisis under which one day's salary was given by the Basic Education Department for the Chief Minister's Relief Fund. The fund will be used in medical testing labs and telemedicine. Contribution is also being made in the COVID-19 Fund, which has been created by the chief minister.

So far, action has been taken against 129 people in the state by registering 91 FIRs on charges of black marketing and profiteering, he said. Adityanath, who earlier in the day held a meeting with senior officials at his residence, also stressed on maintaining social distancing..

The ACS said that directions have been given for preparing a list of anaesthetists, physicians, gynaecologist and pediatricians to provide them necessary training for dealing with any eventuality, besides imparting training to Ayush doctors and paramedical staff. He also called for setting up COVID-19 testing labs in all government medical colleges.

Adityanath has directed for manufacture of personal protective equipments in the state and taking help of youth volunteers of NSS ,NCC, women self-help groups and NGOs. For strengthening the home delivery system the services of postman could also be taken, Awasthi said.

Highlighting that the lockdown in the state has been successful barring some incidents in places like Kannauj, Awasthi said stern action will be taken wherever there is any violation.

All the borders have been sealed and the CM during a video conferencing with district magistrates and superintendents of police of different districts has asked them to personally monitor those under quarantine as they will be held responsible incase anyone escapes, Awasthi said, adding that fogging and sanitisation through fire brigades has started in places like Lucknow Noida and Kanpur.