Get latest articles and stories on Entertainment at LatestLY. The first look pictures of Hollywood star Kate Winslet as a Na'vi warrior from James Cameron's upcoming movie 'Avatar: The Way of Water' have finally been unveiled. 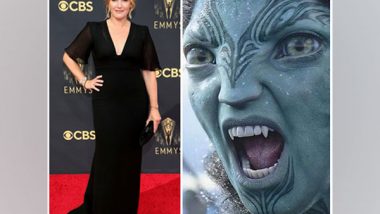 Washington [US], July 1 (ANI): The first look pictures of Hollywood star Kate Winslet as a Na'vi warrior from James Cameron's upcoming movie 'Avatar: The Way of Water' have finally been unveiled.

According to Variety, the images of her character named Ronal have been debuted by a film magazine. The actor described Ronal as a "deeply loyal and a fearless leader."

Winslet, who will be reuniting with her 'Titanic' director with this long-awaited sequel, will star alongside returning cast members Sam Worthington, Zoe Saldana and Sigourney Weaver among others.

While speaking to the magazine about her character, the actor said, "She is strong. A warrior. Even in the face of grave danger, and with an unborn baby on board, she still joins her people and fights for what she holds most dear: her family and their home."

Also Read | Minions The Rise of Gru Full Movie in HD Leaked on TamilRockers & Telegram Channels for Free Download and Watch Online; Steve Carell’s ‘Despicable Me’ Prequel Is the Latest Victim of Piracy?.

Disney's official synopsis for the upcoming 'Avatar' sequel reads: "Set more than a decade after the events of the first film, 'Avatar: The Way of Water' begins to tell the story of the Sully family, the trouble that follows them, the lengths they go to keep each other safe, the battles they fight to stay alive and the tragedies they endure."

For her role, Winslet learned to hold her breath underwater for the movie and ended up breaking Tom Cruise's record for the longest underwater breath-hold in a feature film, reported Variety.

As for what it was like reuniting with Cameron so many years after 'Titanic', Winslet told the magazine, "Jim and I are both totally different people now to who we were 26 years ago. He is calmer, and I am definitely more hyperactive now!"

'Avatar: The Way of Water' will be released by 20th Century Studios in English, Hindi, Tamil, Telugu, Kannada and Malayalam on December 16, 2022. (ANI)