Get latest articles and stories on Entertainment at LatestLY. Bollywood star Sidharth Malhotra dropped some 'fun' glimpses of his recent interaction with Hollywood star Chris Patt in which the two could be seen bonding over fitness, food and 'fart breaks'. 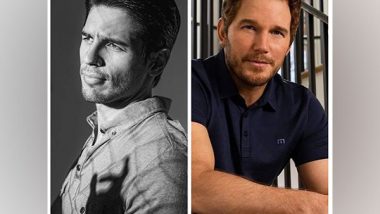 Mumbai (Maharashtra) [India], July 2 (ANI): Bollywood star Sidharth Malhotra dropped some 'fun' glimpses of his recent interaction with Hollywood star Chris Patt in which the two could be seen bonding over fitness, food and 'fart breaks'.

On Saturday, the 37-year-old star took to his Instagram stories and shared a video of the interaction which took place between him and Chris Patt including topics like fitness, and food. Sidharth and Chris also talked about his 'fart breaks' on the sets of his recently released series, The Terminal List.

Chris Patt revealed that the 'fart-breaks' were due to his birthday treats and also as he is a big foodie. "It was my birthday week and my wife made me birthday cookies. You gotta do what you gotta do," he told Sidharth. Adding to this, Sidharth replied that even though he wants to do the same in India, however, it might not be the best option for him.

Responding to Chris about 'fart breaks', Sidharth added, "Maybe I am going to use it on my sets. It's a problem in India that we have so many people around. Even if I step out there are like hundred people around,". The interaction session has been released by the YouTube channel of Amazon Prime Video.

Going further in the video, Sidharth and Chris talk about several topics, including their love for Indian food, fitness and portraying the roles of armed force officers.

For the unversed, Sidharth Malhotra essayed the role of Kargil war-hero Captain Vikram Batra in his hit film Shershaah, well on the other hand Chris Patt was seen as the US Navy SEAL James Reece in The Terminal List, which recently got released on July 1.

Meanwhile, on the work front, Sidharth Malhotra's upcoming film 'Thank God' which was set to release this year in July has been shifted to Diwali 2022. 'Thank God' also stars actor Rakul Preet.

Apart from 'Thank God', Sidharth also has a few projects in the pipeline. He is working on 'Mission Majnu', a spy movie directed by Shantanu Bagchi alongside Rashmika Mandanna. He is also shooting for the action-thriller 'Yodha' starring Disha Patani. (ANI)