Tata Group's takeover of loss-making national carrier Air India is most likely delayed by a month till January as the completion of procedures taking longer than expected, an official said on Monday. 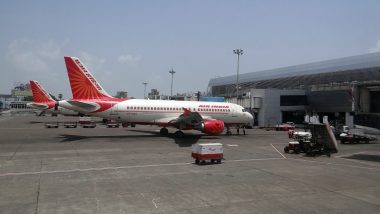 New Delhi, December 27: Tata Group's takeover of loss-making national carrier Air India is most likely delayed by a month till January as the completion of procedures taking longer than expected, an official said on Monday.

In October, the government accepted the highest bid made by a Tata Sons company for 100 per cent equity shares of Air India and Air India Express along with its 50 per cent stake in ground-handling company AISATS -- the first privatisation in 20 years. Also Read | Ludhiana Shocker: 18-Year-Old Killed By ‘Friends’, Body Found Near Sutlej River Three Days After He Went Missing.

At that time, the government had stated that it wanted to complete the transactions, which included Tatas paying Rs 2,700 crore in cash, by December end. Also Read | Madhya Pradesh Horror: 5-Year-Old Girl Raped, Killed in Hoshangabad, Body Found on Roof of Her House.

As per the conditions in SPA, all formalities of handover would have to be completed within 8 weeks, but this date can be mutually extended by the buyer and seller and is being done in this case.

However, some regulatory approvals are yet to come in for the handover, and certain formalities are yet to be completed, the official, who wished not to be named, told PTI. "The process would be completed by January," he said without giving a specific date.

On October 25, the government had signed the share purchase agreement with Tata Sons for the sale of national carrier Air India for Rs 18,000 crore. Tata's would pay Rs 2,700 crore cash and takeover Rs 15,300 crore of the airline's debt.

The cash component would come once the handover process is completed, another official explained. Tatas beat the Rs 15,100-crore offer by a consortium led by SpiceJet promoter Ajay Singh and the reserve price of Rs 12,906 crore set by the government for the sale of its 100 per cent stake in the loss-making carrier.

As of August 31, Air India had a total debt of Rs 61,562 crore. 75 per cent of this debt or Rs 46,262 crore will be transferred to a special purpose vehicle AIAHL before handing over the loss-making airline to Tata Group.

While this will be the first privatisation since 2003-04, Air India will be the third airline brand in the Tatas' stable - it holds a majority interest in AirAsia India and Vistara, a joint venture with Singapore Airlines Ltd.

Air India started suffering losses every year since its merger with Indian Airlines in 2007-08. A Turnaround Plan (TAP) and a Financial Restructuring Plan (FRP) were approved for Air India by the previous UPA regime in 2012.

However, the TAP did not work out, and Air India continued to reel under losses, with the government giving Rs 20 crore per day to keep the airline afloat. Over the last decade, more than Rs 1.10 lakh crore was infused by way of cash support and loan guarantees in the loss-making airline to keep it afloat.