India News | All Problems of Northeast Will Be Solved by 2024, Amit Shah Tells BJP Meet

Get latest articles and stories on India at LatestLY. Union Home Minister Amit Shah, who made several moves to resolve the long-pending issues of the Northeastern states, on Sunday said that the BJP has found a "permanent address" in the region. 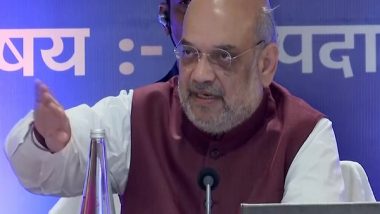 Hyderabad (Telangana) [India], July 3 (ANI): Union Home Minister Amit Shah, who made several moves to resolve the long-pending issues of the Northeastern states, on Sunday said that the BJP has found a "permanent address" in the region.

The Home Minister made the remarks while speaking at the BJP national executive meeting during his address on the political resolution.

"You know that the Opposition has been objecting to a number of things on a number of reforms by the Modi government including the CAA. There has been a delay but we are committed to implementing CAA and the rules will be formed," Sarma said.

Detailing how the BJP plans to solve the problems of the Northeast region, Sarma said, "Amit Shah spoke about how the journey of the BJP has been in the north-east and development post-arrival of the Modi government in 2014... We also discussed how the AFSPA has been removed from the northeast region in about 60 per cent of the areas... He also said that by 2024, there will be no more fault lines in the north-east and all the issues will be solved."

Meanwhile, Union Home Minister Amit Shah on Sunday moved the political resolution on behalf of the BJP during the party's national executive meeting and slammed Opposition parties for targeting the then Gujarat Chief Minister Narendra Modi in the 2002 riots case.

Shah threw light on the recent verdict of the Supreme Court giving a clean chit to then Gujarat Chief Minister in the 2002 Gujarat riots case where the petitioner was Zakia Jafri, widow of former Congress MP Ehsan Jafri, challenging the clean chit given by the Special Investigation Team (SIT) to Narendra Modi.

The Supreme Court on June 24 dismissed the plea filed by Zakia Jafri, widow of former Congress MP Ehsan Jafri, challenging the clean chit given by the Special Investigation Team (SIT) to then Chief Minister Narendra Modi and several others in the 2002 Gujarat riots.

A bench headed by Justices AM Khanwilkar said that it finds the appeal as "devoid of merit". (ANI)