"Khela Hobe" slogans in Parliament were raised when Adhir Ranjan Chowdhury was present in the House and Mamata Banerjee is in Delhi on a 4-day trip to unite the entire Opposition for 2024 elections by meeting with the leaders of the opposition parties. 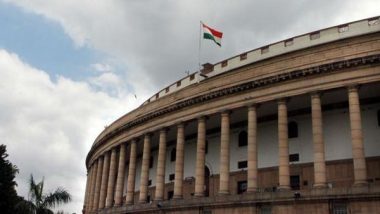 New Delhi, July 28: Amid the continuous ruckus created by the Opposition during the question hour in the Lok Sabha on Wednesday, Congress MP Jasbir Singh Gill from Khadoor Sahib constituency in Punjab raised the slogan of Trinamool Congress 'Khela Hobe'.

"Khela Hobe" slogan was coined by the Trinamool Congress during the West Bengal polls and Mamata Banerjee gave a clarion call to the leaders of Opposition parties to set up a united front for 2024 polls and had said, "'Khela' will happen in all states until BJP is removed from the country. We'll celebrate 'Khela Diwas' on August 16." Mamata Banerjee Meets Sonia Gandhi, Rahul Gandhi With An Eye on Lok Sabha Elections 2024, Discusses Opposition Unity, Pegasus Row.

Despite this, Jasbir Singh Gill continued to protest in the House, raising the slogan 'Khela Hobe' while demanding a discussion on the 'Pegasus Project' report to which most of the Congress MPs did not support him. Trinamool Congress MPs continued with their slogan of Khela Hobe with more enthusiasm.

"Khela Hobe" slogans in Parliament were raised when Adhir Ranjan Chowdhury was present in the House and Mamata Banerjee is in Delhi on a 4-day trip to unite the entire Opposition for 2024 elections by meeting with the leaders of the opposition parties.

In such a situation, the question is bound to arise on whether a Punjab Congress MP is influenced by Mamta Banerjee or there is a lack of coordination on the part of the Congress leadership.

It is worth mentioning that during the current Monsoon session of the Parliament, Trinamool Congress wants to discuss the issue of Pegasus, on which Congress and other opposition parties were also together. Punjab Congress MPs are demanding a discussion on three agricultural laws and farmers' issues.

Today, all the opposition parties including Congress, Trinamool Congress, DMK, Shiv Sena, and Shiromani Akali Dal created a ruckus regarding these issues.

The government slammed the opposition for repeatedly creating pandemonium in the House.After the joint opposition meeting that decided to work together demanding investigation on Pegasus issue, Congress and DMK too joined Trinamool leaders as the latter shouted "Khela Hobe" slogans in the well of the House. Mamata Targets BJP-led Government, Says 'We Want to See 'Sacche Din', Saw Enough of 'Achhe Din'.

Meanwhile, a few of the opposition members after shouting slogans for almost an hour tore the placards and papers and threw them in the air. A few of these landed on the Speaker's table. A placard even flew in the visitors' gallery. A placard thrown by Congress MP Ravneet Singh Bittu fell in the Press Gallery. The government is constantly alleging that the opposition is not only divided on different issues but is also trespassing on the dignity of the House.