Referring to her meetings with Congress president Sonia Gandhi and other opposition leaders, she said "we are talking to each other". 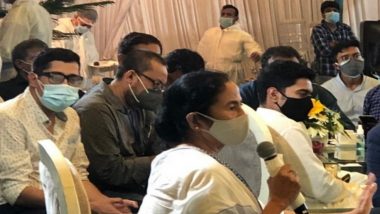 Mamata Banerjee, who is in the national capital, did not rule out her taking the lead of a grouping of opposition parties to take on the BJP-led government in the next Lok Sabha polls.

"We will sit together and decide, I am not a political astrologer. The decisions depend on the system, depends on political parties. I cannot impose my decision on others," she said. "Poore desh me khela hoga, it's a continuous process. When general elections come (2024), it will be Modi versus country," she added. Amid Mamata Banerjee's Tour in Delhi, Congress MP Jasbir Singh Gill Raises 'Khela Hobe' in Lok Sabha While Demanding Discussion on Pegasus.

BJP had raised slogan of 'ache din' ahead of 2014 Lok Sabha elections.

Referring to her meetings with Congress president Sonia Gandhi and other opposition leaders, she said "we are talking to each other".

"Sonia Gandhi also wants opposition unity. After the Parliament session, we must start meeting. When we will meet there will be a political discussion. I'm a simple worker," she said. Targeting the BJP-led government, Mamata Banerjee alleged that her phone is tapped.

"My phone is already tapped. If Abhishek's (Abhishek Banerjee) phone is tapped, then my phone is automatically tapped as I am talking to him. There is no freedom of the press, Pegasus is a deadly virus that has put everyone's life in danger," she said. Mamata Banerjee Meets Sonia Gandhi, Rahul Gandhi With An Eye on Lok Sabha Elections 2024, Discusses Opposition Unity, Pegasus Row.

Asked about I-PAC team having been detained in Agartala, she said: "We sent some people to Tripura. They are house arrested. If a journalist goes there, they are being threatened like this." Mamata Banerjee arrived in Delhi on Monday and met Prime Minister Narendra Modi on Tuesday.