Get latest articles and stories on India at LatestLY. All seven accused were granted four-day transit remand after being produced before the Amravati court in the barbaric killing of shop owner Umesh Prahladrao Kolhe. 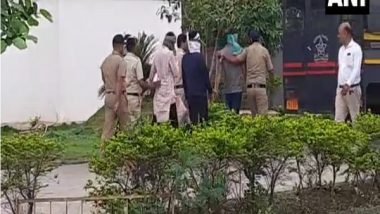 Amravati (Maharashtra) [India], July 4 (ANI): All seven accused were granted four-day transit remand after being produced before the Amravati court in the barbaric killing of shop owner Umesh Prahladrao Kolhe.

Amravati Police to present all accused before NIA's Mumbai court on or before July 8.

The police on Saturday arrested the mastermind and seventh accused in the brutal killing of Amravati-based shop owner Umesh Kolhe.

A district court in Amravati has sent the key accused Irfan Sheikh, the mastermind in the murder case to police custody till July 7.

Exactly a week before tailor Kanhaiya Lal Teli was hacked to death in Udaipur, Umesh Prahladrao Kolhe, a 54-year-old chemist, was killed in Maharashtra's Amravati district on June 21.

Investigators so far believe that Kolhe was killed allegedly in retaliation for a social media post supporting BJP's Nupur Sharma who had made controversial comments on the Prophet in a television debate.

The number of arrests may increase after the main accused in the brutal murder of an Amravati-based shop owner Umesh Kolhe is nabbed, said a police official on Sunday.

"He (mastermind) was arrested last night. He's being interrogated. They have a helpline group-Rehbar group. Several people connected to them. 7 accused have been arrested so far. The number of arrests may rise after the arrest of the main accused," said Nilima Araj, Police Inspector when asked about the mastermind of the Amravati murder.

Union Home Minister Amit Shah directed the National Investigation Agency (NIA) to take over the probe into the brutal killing of Maharashtra's Amravati-based shop owner Umesh Kolhe on June 21, after he wrote a post in support of Nupur Sharma on Facebook.

Home Minister's Office (HMO) made the announcement through its Twitter handle as the matter was similar to the Udaipur case in which a tailor Kanhaiya Lal Teli was killed in broad daylight by two men. (ANI)