A dog owner in Andhra Pradesh installed a bronze statue in memory of his dog on his fifth death anniversary on Thursday. 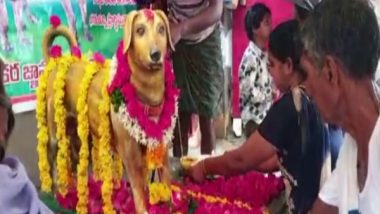 Visual of the bronze statue of the dog (Photo/ANI)

Krishna (Andhra Pradesh) [India], July 22 (ANI): A dog owner in Andhra Pradesh installed a bronze statue in memory of his dog on his fifth death anniversary on Thursday.

He and his family had groomed their dog for more than nine years with affection. The pet dog had died five years ago.

Since then, Prakasa Rao has been observing the pet's death anniversary every year.

This afternoon, special prayers were offered at the statue and the ceremony was performed with much fervour. Lunch was also organised for the villagers.

Speaking to ANI, Rao said, "We considered this animal as our own child. We brought up this animal for many years. It had been cooperative and loyal throughout its life. We are observing fifth death anniversary today as it is our responsibility." (ANI)