Rahul Gandhi Slams Centre Over Its COVID-19 Policies, Says ‘Apps Like Unqualified Setu and NoWin Will Not Save, but Two Jabs of Vaccine Will’

Referring to the apps, Arogya Setu and CoWin, Congress leader Rahul Gandhi attacked the Centre's policies for Covid-19 control and said that "Unqualified Setu and NoWin" will not save, but two jabs of Covid vaccine will do so. 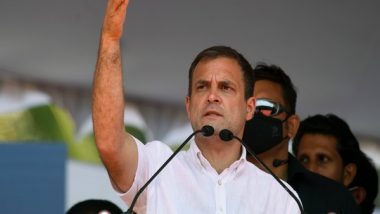 New Delhi, May 10: Referring to the apps, Arogya Setu and CoWin, Congress leader Rahul Gandhi attacked the Centre's policies for Covid-19 control and said that "Unqualified Setu and NoWin" will not save, but two jabs of Covid vaccine will do so.

"Message to the app-dependent PM Modi government: Unfortunately, Covid-19 is spreading to those who do not have internet facility-that is, more than half the population of the country! Apps like 'Unqualified Setu and NoWin' will not save, but rather two jabs of vaccine will", tweeted Gandhi in Hindi. The Congress Working Committee met today amidst an unprecedented public health crisis. India COVID-19 Numbers: With 3.6 Lakh New Cases, 3,754 Deaths, Total Cases Cross 2.26 Crore.

"The second wave of the Covid-19 pandemic is nothing short of a grave calamity and a direct consequence of the PM Modi government's indifference, insensitivity and incompetence. It is the direct result of the central government's wilful disregard for scientific advice, its premature declaration of victory over the pandemic (that turned out to be just the first wave), and its unwillingness and inability to plan in spite of warnings sounded not only by public health experts but also by the Standing Committee of Parliament," stated a press release by the Congress party.

The Congress Working Committee is concerned about the Modi government's vaccination strategy. Vaccine supplies are insufficient, yet the government denies the hard facts. The pricing policy is opaque and discriminatory. And contrary to economic and all other logic, the government has passed on the financial responsibility for vaccinating the 18-44 year population to the state governments, which are already facing severe financial stress. Worse, the mandatory online registration without a walk-in option will exclude -- and may have already excluded --millions of our citizens, particularly those in rural areas and those belonging to the weaker sections of society.

Dr Manmohan Singh wrote to the Prime Minister after the last meeting of the CWC on April 17, 2021 giving five specific suggestions to increase vaccine supplies and coverage. However, instead of taking his suggestions in the constructive spirit in which they were offered, the Prime Minister instructed the Union Health Minister to reply to Dr Manmohan Singh in a most undignified manner.

Since the last meeting of the Congress Working Committee, it is noticed that the infection has travelled massively into rural areas with zero access to RT PCR testing, medicines, oxygen or hospitalisation resulting in a large number of deaths. Even across the country, the inhumane crisis of non-availability of oxygen, hospital beds, Remdesivir, Ivermectin, Tocilizumab injections and vaccines reflects the failure of the central government. This has happened despite India producing sufficient quantity of Oxygen and Remdesivir injections as also the vaccines.

"The CWC noted with concern that the data on Covid deaths is wrong and afflicted by massive non-reporting of deaths. The solution lies in facing the challenge and stopping casualties from Covid-19 and not in concealing the truth by burying the data on deaths and infections," stated the release.

The Congress Working Committee expresses its revulsion at the shocking expenditure priorities of the Modi government. At a time when the nation's resources should be devoted to ensuring expansion of vaccination coverage and supply of essential medicines and oxygen, the Modi government is indulging in criminal waste of money by continuing with the personal vanity project of the Prime Minister in the national capital. This is the height of callousness as also an insult to the people.

The Congress Working Committee appreciates the assistance that has been given by the international community at this time of national crisis. However, it needs to be said that there is total non-transparency in the distribution and utilisation of these supplies. Our need for assistance is also a sad reflection of the governance and policy failures of the Modi government.

The Congress Working Committee is of the belief that this a time for showing a sense of national unity, purpose and resolve. In order that it may become a reality, the Prime Minister must atone for his mistakes and commit to serving the people instead of carrying on with personal agenda, oblivious to the suffering around. The Congress Party commits to fighting the Covid-19 pandemic with its entire might and will support every people-friendly initiative of the government in fighting the pandemic.