Get latest articles and stories on India at LatestLY. In a sharp attack on rebel MLAs amid the Maharashtra political crisis, Shiv Sena leader Aaditya Thackeray on Monday claimed that 15 to 20 MLAs, who are with Eknath Shinde's rebel camp are in touch with Shiv Sena and have urged the party to bring them back to Mumbai from Guwahati. 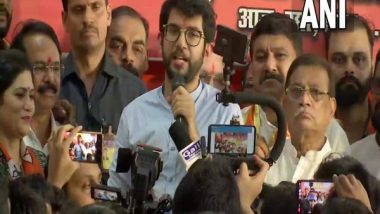 Mumbai (Maharashtra) [India], June 28 (ANI): In a sharp attack on rebel MLAs amid the Maharashtra political crisis, Shiv Sena leader Aaditya Thackeray on Monday claimed that 15 to 20 MLAs, who are with Eknath Shinde's rebel camp are in touch with Shiv Sena and have urged the party to bring them back to Mumbai from Guwahati.

He said that the rebel MLAs have sold themselves for lakhs and crores.

"These MLAs have sold themselves for Lakhs and Crores or after their files were opened. MVA government will further continue. The power which has brought us here...we will come to power in Delhi too," said Thackeray while addressing Shivsainiks in Byculla, Mumbai

He said that the rebels who are currently staying at a hotel in Assam, sold themselves when Chief Minister Uddhav Thackeray was hospitalised.

"When the CM was hospitalised, they (rebel MLAs) sold themselves. I would like to ask them, is there no humanity left? We trusted them," he added.

"There are two groups of people in Guwahati - there's a group of 15-16 people who are in touch with us, some of them recently. The other group is the one that has run away, they have no courage and morality," the minister said.

Further, he openly challenged the rebels in revolt and said that have the courage to resign and stand in front of them.

"They conceived an entire conspiracy when CM (Uddhav Thackeray) was incapacitated as a CM to work 24x7; even then he was working. Whoever wants to come back, our doors are open...if those in revolt are truly courageous, resign and have the courage to stand in front of us," he said.

He said the leader of the rebel group Eknath Shinde was offered the post of Chief Minister in May but "he did drama".

"Many people told us that Congress and NCP will betray us but our people betrayed us. Many MLAs who were watchmen, rickshaw drivers, and paan shopkeepers - we made them Ministers. On 20th May, Uddhav Thackeray offered him (Eknath Shinde) the CM post and he did drama," Aaditya Thackeray said.

He said there was anger among party workers over the action of party rebels. "I can understand your zeal and strength, can even notice your anger. I've been visiting and interacting with Shivsainiks and I can see there is a lot of anger among them. But there is one positive thing the dirt has gone out of Shiv Sena," he said.

Aaditya Thackeray claimed that the food bill of rebel MLAs was to the tune of Rs 9 lakh per day and alleged they were taking private choppers.

The Shiv Sena camp led by Chief Minister Uddhav Thackeray and the rebel group has been seeking to outmanoeuvre each other. While the Thackeray group removed Shinde as leader of the legislative party and appointed a new chief whip, supporters of Shinde wrote to the state government that he continues to be the leader of the Shiv Sena legislature group. They also appointed a chief whip.

The battle between the groups has now reached the Supreme Court which on Monday granted interim relief to Shinde and other MLAs to file their reply to disqualification notices issued to them by the Deputy Speaker of Maharashtra Assembly by July 12, 5.30 pm.

Earlier, the Deputy Speaker had granted them time to file a reply by Monday, 5.30 pm.

The apex court was hearing the petitions filed by the Shinde group challenging the disqualification notices issued by the Deputy Speaker to 16 rebel MLAs as well as the appointment of Ajay Choudhary as Shiv Sena Legislature Party leader.

The bench also issued notices to the Deputy Speaker, Secretary of Maharashtra State Legislative Assembly, the Centre, Ajay Chaudhary, and Sunil Prabhu and asked them to file a reply within five days.

On the request of providing security to 39 MLAs alleging threats to them, the Supreme Court recorded the statement of the standing counsel of the Maharashtra government, Rahul Chitnis, that adequate steps have already been taken and the state government will further ensure that no harm is caused to the life, liberty, property of the MLAs.

During the hearing, senior advocate Neeraj Kishan Kaul appearing for Eknath Shinde and others told the Supreme Court that the Deputy Speaker cannot proceed with the disqualification proceedings when the resolution seeking his removal is pending. (ANI)