Bharatiya Janata Party general secretary Arun Singh on Friday slammed Mukul Roy over his decision to rejoin Trinamool Congress (TMC) and accused him of doing "politics of convenience and opportunism". 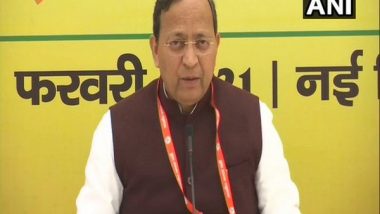 "Only those who practice politics of convenience work like this. After Abhishek Banerjee emerged, he had thrown Roy out of the party. Then he came to the BJP, and now again he returned to TMC. His 'Aaya Ram, Gaya Ram' story will continue," Singh said.

"He will go wherever he finds convenience. He won election on symbol of BJP. He should have gone after stepping down first (as MLA). Even today, he is roaming around with the security of the central forces," the BJP leader added.

He alleged that Roy has never been "a leader of masses."

Singh also referred to Roy's name figuring in alleged corruption cases and his suspension from Trinamool Congress for six years.

"When Trinamool came to power, he was the second-in-command. When he came to BJP, Trinamool lodged several cases against him. Now those cases will be withdrawn and he will become a good boy," he said.

Singh alleged that there was information that Roy passed "internal information" to TMC which damaged BJP.

Roy, who was a BJP vice president, rejoined Trinamool Congress on Friday. (ANI)