Calling Charanjit Singh Channi's taking office as Punjab Chief Minister a watershed moment, former state Congress president Sunil Jakhar on Friday said the 'warp and weft' of the social fabric of the state must be respected, maintained and nurtured as 'Raj Dharma'. 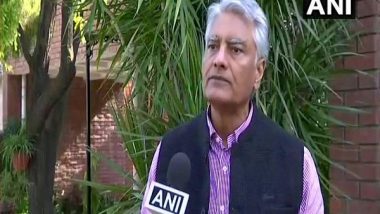 Taking to Twitter, Jakhar also took a swipe at Opposition parties in Punjab for raising the question of the choice of the new Chief Minister, and said, "All the political opponents of the Congress Party are literally missing the forest while counting trees in attributing political motives to the Congress party's choice of chief minister of Punjab."

"What Rahul Gandhi has done by choosing Charanjeet Channi as CM is that he has broken the barely perceptible 'glass ceiling'," he said.

Calling Channi's appointment as Punjab Chief Minister a bold decision, the Congree leader said the move was "very much rooted in the ethos of Sikhism, is nevertheless a watershed moment not only for the polity but also for the social fabric of the state".

"The warp and weft of this fabric is a complex interplay of aspirations and anxieties of all sections of society. This must be respected, maintained and nurtured as 'Raj Dharma' at all times," he said.

In what seemed like a veiled dig at former Chief Minister Captain Amarinder Singh, Jakha said that if handled in an "inept or biased" manner the prevailing robust brotherhood and amity of Punjab can shatter like a "glasshouse"

"But there is clear and present danger of Punjabiat being put to test once again with usual divisive forces already weaponising this transformative initiative to fragment the society. This threat just can not be wished away. Also, coupled with this, if handled in inept and/or biased manner the prevailing robust brotherhood and amity, which has always been the pride of Punjab even in very testing times, can be as just fragile and shatter just as easily as a 'glasshouse'," he said.

"The new congress dispensation is being keenly watched whether they have what it takes," the former PPCC chief added.

Capt Amarinder Singh after resigning from the post of Punjab Chief Minister on Saturday, made it clear that he will oppose any move to make state Congress chief Navjot Singh Sidhu chief ministerial face of Congress government in the state and said he will be a "disaster for Punjab".

On Monday, Jakhar expressed his disagreement over remarks of senior party leader Harish Rawat on the day of swearing-in about facing the upcoming Assembly election under the leadership of Navjot Singh Sidhu instead of the first Dalit Chief Minister Channi.

These developments came months before the 2022 Punjab Assembly elections. (ANI)