After a series of cases where poor villagers have received crores of rupees in their bank accounts, a daily wager learnt that he was having Rs 9.99 crore in the Union Bank of India, Supaul branch. 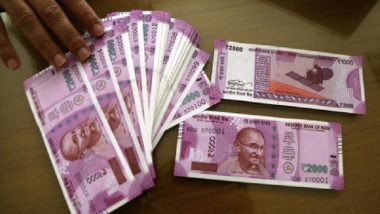 Patna, Sep 24: After a series of cases where poor villagers have received crores of rupees in their bank accounts, a daily wager learnt that he was having Rs 9.99 crore in the Union Bank of India, Supaul branch. Interestingly, the labourer named Vipin Chauhan claims that he never opened an account in any bank.

Chauhan, a native of Sisauni locality in Bihar's Supaul town went to the customer service point (CSP) outlet of the Union Bank of India to open a job card for MGNREGA on Thursday. Bihar: Bank Accounts of Two Children Credited with Over Rs 900 Crore in Katihar District; Bank Orders Probe.

When the official of the CSP outlet checked Vipin Chauhan's financial status using his Aadhar Card number, he found that an account already existed in his (Vipin Chauhan) name. Adding to Chauhan's shock was the fact that the savings account, which was in his name, had a Rs 9.99 crore deposit.

"I have approached the concerned bank branch, the officials have checked the details of the account. It was opened on October 13, 2016 and the transaction of crores of rupees took place in the account in February 2017. The bank official did not find my photograph, signature or thumb impression. Only the Aadhar Card number is mine. At present, Rs 9.99 crore still remain in the account," Chauhan said.

The bank officials searched the account opening form but it was not found in the branch.

"We have freezed the bank account after it came to our knowledge. The internal investigation is currently underway to find out if other accounts were used in the transactions with this account," said an official of Union Bank of India.

This is not the first case in Bihar. An elderly person Ram Bahadur Shah of Singari village under Katra police station in Bihar's Muzaffarpur district received Rs 52 crore in the bank account.

Another incident appeared in Katihar district when two school students of Class 6 -- Ashish Kumar and Gurucharan Biswas -- received Rs 6,20,11,100 and Rs 90,52,21,223 respectively in their bank accounts on September 15.

Both the children are natives of the Pastia village in Bagahura Panchayat. They have bank accounts in Uttar Bihar Gramin Bank.

Besides, a person named Ranjit Das also received Rs 5.5 lakh in his bank account. Das refused to return the amount. He claimed that PM Narendra Modi had promised Rs 15 lakh to every country man and it was the first installment of Rs 5.5 lakh.

As he did not return the money, the bank had registered an FIR against him. He is currently lodged in jail.

(The above story first appeared on LatestLY on Sep 24, 2021 11:39 AM IST. For more news and updates on politics, world, sports, entertainment and lifestyle, log on to our website latestly.com).