The Cold War between the Congress and the TMC has raised questions about Opposition unity. The cold war is visible during the winter session of Parliament. As the TMC is heading for pan-India expansion, the two parties are avoiding an open confrontation, but the rift between the two is seen in their actions. 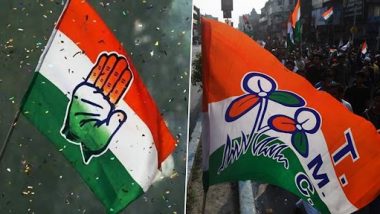 New Delhi, November 30: The Cold War between the Congress and the TMC has raised questions about Opposition unity. The cold war is visible during the winter session of Parliament. As the TMC is heading for pan-India expansion, the two parties are avoiding an open confrontation, but the rift between the two is seen in their actions.

Around August 20 this year, the picture seemed positive when TMC chief Mamata Banerjee met Congress interim President Sonia Gandhi and both conveyed a message of opposition from 10 Janpath. Banerjee had said the opposition parties should come together to fight the BJP government at the Centre. Also Read | Omicron Symptoms: Patients Show Extreme Tiredness, No Major Oxygen Drop.

But today the things are the opposite. The TMC is expanding pan-India and the biggest loser seems to be the Congress Party. There is induction of new leaders from the other parties, TMC started from Assam where Mahila Congress chief Sushmita Dev joined TMC and this trend reached Goa, Uttar Pradesh, Delhi and then Meghalaya where leader of the opposition in Meghalaya assembly Mukul Sangma and other MLAs merged with the TMC. Also Read | Sputnik V, Sputnik Light Will Neutralise Latest COVID-19 Variant Omicron, Says RDIF.

The war has not ended outside Parliament and it has now started inside the house too TMC chose to skip the opposition meeting called by the leader of the opposition in Rajya Sabha Mallikarjun Kharge. On the first day of the winter session Congress staged a protest in front of Gandhi statue while the TMC MP staged a separate protest. TMC skipped the meeting called by leader of the opposition Mallikarjun Kharge in his office in Parliament over the suspension of 12 opposition MPs from the Rajya Sabha. For the joint statement of 11 Opposition parties, the TMC chose to distance itself and held a separate press conference.

The TMC was also absent when Mallikarjun Kharge spoke to the media along with the other opposition parties MPs inside the parliament on the suspension of Opposition MPs.

According to Congress party sources, Kharge's office approached TMC to get approval that their name can be written in the joint statement but TMC declined the move saying that they are already talking to the media about it.

Now Kharge has called the opposition parties meeting on the second day of the winter session to finalize the stand of opposition parties on the suspension of MPs from Rajya Sabha. However, TMC sources are saying they will skip this meeting. This highlights that there is a cold war between the two parties.

Sources say, "This only shows that TMC has its own aspirations while the Congress party is avoiding a confrontation so that it is not blamed for breaking opposition unity."

Recently Mamata Banerjee visited Delhi but she did not meet Sonia Gandhi. When asked by reporters why she did not meet Gandhi, Banerjee said, "Is it mandatory to meet Mrs Gandhi?" Even on the Monday, when Leader of Congress Party in Lok Sabha stood up to speak up when the Farm Laws Repeal Bill was tabled, TMC MPs started shouting slogans and after that house was adjourned.

Speaking to ANI, Adhir Ranjan Chowdhury said, "TMC party is playing a double game. In the last monsoon session, they were with us. At that time also, the same protocol was followed. Being an opposition leader amongst many anti-government parties, she had called for the meetings. But in this winter session, within a span of two or three months, TMC party led by Mamata Banerjee has taken a political somersault."

"In between her nephew was called by ED and deal was done with the BJP that he will be provided a safe shelter and you take on opposition unity. As a good gesture, we invited all the opposition parties including TMC. But TMC opted out after having exchange of views with all the parties of Parliament. TMC has been left isolated. So now, by their own deeds, they are playing as a second fiddle to BJP. As a consequence, BJP is the highest incidental beneficiary... thanks to Mamata Banerjee's anti Opposition stand," he said. It seems the guns will not fall silent in the days to come.