Get latest articles and stories on India at LatestLY. Congress leader Harish Rawat on Saturday used a cricketing analogy to talk about the party, stating that its "form was down but not out" nationally, it is in "full form" in the poll-bound Uttarakhand. 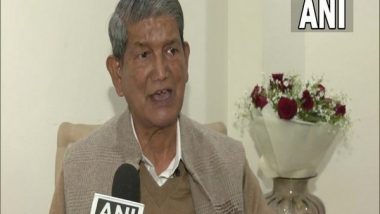 New Delhi [India], January 22 (ANI): Congress leader Harish Rawat on Saturday used a cricketing analogy to talk about the party, stating that its "form was down but not out" nationally, it is in "full form" in the poll-bound Uttarakhand.

The former Uttarakhand Chief Minister, who is the party's face in the state in the upcoming polls, told ANI in an interview that people were returning towards the Congress.

"People are coming back towards Congress. There is a time in the history of every party...As they sometimes say a batsman gets out of form, at this time our form is little down but not out, it is down, we will regain it, we want to assure the country," he said.

Asked about the import of his remarks with less than a month left for polls in Uttarakhand, the former Chief Minister said he had made the remarks about the party in the context of the entire country.

He said regional parties gaining at some places at cost of Congress was a "very temporary phase".

Harish Rawat was answering a query about Congress conceding space to regional parties.

The former Chief Minister said that regional parties have not been very successful except in southern parts of the country, especially Tamil Nadu, besides Odisha and now Bengal. He said that these parties have been successful as they have followed the policies of Congress.

"With new culture different from Congress, there has been some success in Tamil Nadu, not elsewhere," he said.

Asked about the induction of expelled BJP leader Harak Singh Rawat in the Congress, Harish Rawat said party always decides by looking ahead and its decision is supreme.

"It's good that he's part of the party. Decisions within the party are taken on basis of various ideas. The party always decides by looking ahead. Party's decision is supreme," he said.

Harish Rawat was seen to be uncomfortable with Harak Singh Rawat's re-entry into the party and had apprised the party leadership about his views.

Harak Singh Rawat was dismissed from the Uttarakhand Cabinet and expelled from the BJP on Monday for "anti-party activities".He was one of the 10 MLAs who had left the Congress in 2016 and joined BJP.

Harish Rawat is leading the Congress campaign in Uttarakhand and the party has not officially declared a chief ministerial candidate. The state will go to the polls on February 14. (ANI)