They reached Gedduru village in Mandasa mandal by evening. At around 5.00 pm, a wave hit the boat and five of them fell into the Bay of Bengal," said Govindarao. 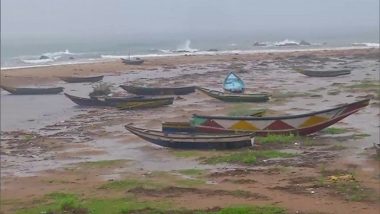 Srikakulam, September 26: Due toturbulence in sea on the account of cyclonic storm Gulab, two fishermen from Andhra Pradesh's Srikakulam died and one went missing after a boat capsized in Bay of Bengal on Sunday. According to Sub Inspector of Vajrapukotturu Police Station, Govindarao,

"There were six fishermen, all residents of Andhra Pradesh's Srikakulam, on the boat, out of which five fell in the sea due to strong waves". The officer informed that out of these five persons who fell in the sea, three reached ashore safely but, two others died. "One fisherman who was on the boat is still missing," he added. The incident took place around 5.00 pm today when the boat was enroute to Andhra Pradesh from Odisha via sea route.

"A team of six fishermen are returning from Odisha on sea route to MN Peta village in Vajrapu kotturu mandal this morning. They reached Gedduru village in Mandasa mandal by evening. At around 5.00 pm, a wave hit the boat and five of them fell into the Bay of Bengal," said Govindarao. Cyclone Gulab: 5 Fishermen from Andhra Pradesh's Srikakulam Fell Into Sea After Strong Waves Hit Boat Off Mandasa Coast.

Vanka Chiranjeevi, one of the survivors spoke to Andhra Minister Seediri Appala Raju over the phone and requested the Minister to help in search of their missing colleague.

The minister Seediri Appalaraju told Chiranjeevi that the state government has informed the matter to navy, and they launched a search operation. A red alert was sounded in Odisha and Andhra Pradesh for a cyclonic warning, and fishermen were alerted to stay away from sea by the Indian Meteorological Department (IMD) on Sunday.