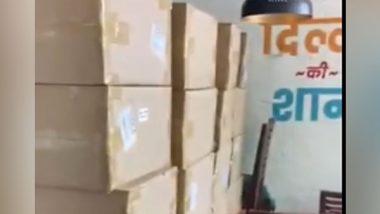 Visuals from the Khan Market restaurant

The two restaurants namely Khan Chacha and Town Hall are owned by Navneet Kalra, who is on run, said police, adding that the manager and three staffers have been arrested. Gourav Khanna, CEO of Matrix Cellular Services Ltd, Arrested in Connection With Seizure of Oxygen Concentrators From Khan Chacha Restaurant.

"With the further seizure of 105 oxygen concentrators from two upscale restaurants in Khan Market namely Khan Chacha and Town Hall, a total of 524 oxygen concentrators were seized from blackmarketers. Owner Navneet Kalra, who also owns Dayal Opticals, is on run. The manager and three staffers were arrested. Further raids on," Delhi Police tweeted.

Meanwhile, Delhi Police has arrested Gourav Khanna (47), a resident of Orchid Appartments, Sector 54, Gurugram on Friday night in connection with the case. Khanna is the CEO of Matrix Cellular Services Ltd which is one of the companies involved in importing the equipment.

According to Delhi Police, Matrix Cellular received a consignment of 650 oxygen concentrators, of which 524 have been recovered. The concentrators are being sold for as much as Rs 71,000.

Earlier, Delhi Police had seized 419 oxygen concentrators from a restaurant and a farmhouse in South Delhi on Wednesday

"419 oxygen concentrators seized by the team of PS Lodhi Colony from the restaurant and bar Nege Ju and south Delhi farmhouse in a raid against black-marketing and hoarding. Four persons are arrested. The accused have been criminally profiteering by selling at 3.5 times rates to needy people," said Delhi Police.