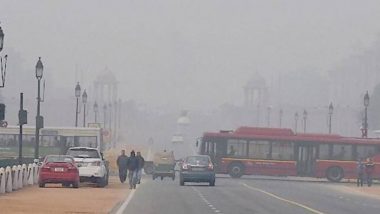 New Delhi, September 8: Delhi on Wednesday recorded a minimum temperature of 26 degrees Celsius, a notch below normal, according to the India Meteorological Department (IMD). The national capital is likely to witness generally cloudy skies and light rain or drizzle in the day, the IMD said.

The relative humidity was recorded at 84 per cent at 8.30 am. Delhi's air quality index (AQI) was recorded at 80, which falls in the 'satisfactory' category, at 8 am, according to Central Pollution Control Board data. Monsoon 2021 Forecast: Maharashtra and Gujarat Brace for Heavy Rainfall Till September 11, Rains to Continue in North India.