Assam: Doctors Protest in Guwahati Over Assault on Medical Practitioner in Hojai 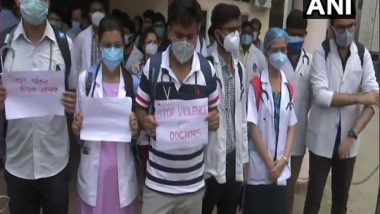 New Delhi, June 2: Doctors at Guwahati Medical College and Hospital (GMCH) on Wednesday staged a protest over the incident in which a doctor was assaulted in Assam's Hojai district yesterday. Doctors in GMCH protested carrying posters written "Stop Violence against Doctors".

"Taking into serious account of the recent incident of assault on a doctor in Assam, Resident Doctors Association AIIMS demands strict action against the perpetrators according to the Epidemic Disease Act, 1897 and prevention of any such incidents in future," said RDA, AIIMS.

Dr Seuj Kumar Senapati, posted at COVID facility in Assam's Hojai district was attacked by a mob on Tuesday following a patient's death. "Patient's attendant told me that he had not urinated since morning. I went to check and found him dead. His relatives started abusing and beating me," Dr Senapati said.

In a letter to the Home Minister, IMA referred to an incident in Assam on Monday in which a mob thrashed a doctor after a COVID-19 patient died and said there was a "barbaric attack" on Dr Seuj Kumar.

As many as 24 people have been arrested in connection with the thrashing of a doctor in Assam's Hojai district, informed Chief Minister Himanta Biswa Sarma on Wednesday.

"24 culprits involved in this barbaric attack have been arrested and the chargesheet will be filed at the earliest. I am personally monitoring this investigation and I promise that justice will be served," he tweeted.